SYRIA: TWO YEARS IS TOO LONG

Islamic Relief has launched a new campaign for Syria

Assalamu Alaykum / Peace be with you
Marking the second anniversary of the Syrian conflict, Islamic Relief hopes to create more awareness of the devastating situation in Syria and provide solutions to ease the human suffering.

A report, entitled Syria, two years, too long: Key recommendations for easing the suffering of the Syrian people calls on the UN security council to commit to the negotiation of humanitarian corridors and cross-border operations for the unhindered delivery of aid inside Syria.

Along with the report, Islamic Relief is calling on supporters, staff, colleagues and children across the world to play a part in helping the people of Syria. Visit www.syria2long.com for more information.

Tonight and for the rest of the month, we are urging all IR staff to go online, share our report and try and get family, friends and other colleagues to email the United Nations on behalf of the people of Syria.

If you’re tweeting, use the hashtag:  #Syria2long

2)     FOR THE KIDS: Write a handwritten letter or draw a picture for Syria. Post it directly to the UN or send it to our Birmingham offices and we’ll send it for you

5)     Donate to our Syria appeal
Thank you for making a difference for Syria.  To get in touch with our Syria campaign team please contact ircampaigns@irworldwide.org
No comments:

Continuing the legacy of Rachel Corrie

President Obama is preparing for his visit to Israel on March 20th, just four days after the anniversary of Rachel Corrie's death. March 16, 2013 marks 10 years since the brutal killing of Rachel Corrie by a Caterpillar bulldozer in Rafah, Gaza, as she tried to prevent Israeli forces from demolishing a Palestinian home. As the Rachel Corrie Foundation marks the 10th anniversary of her death with a call to action, we urge people to continue her legacy by staying educated and engaged.

Staying educated can be as simple as watching a movie, such as the award-winning films 5 Broken Cameras or Budrus. Both cover the nonviolent resistance efforts in the West Bank and are conveniently available on Netflix.

Prefer to read? Learn the history of the conflict with Ilan Pappe's The Ethnic Cleansing of Palestine, available for instant download on kindle. Stay current with Ben Ehrenreich's article in the NYTimes, Is This Where the Third Intifada Will Start? and Joseph Levine's On Questioning the Jewish State.

In Rachel's words, "The international media and our government are not going to tell us that we are effective, important, justified in our work, courageous, intelligent, valuable. We have to do that for each other, and one way we can do that is by continuing our work, visibly." So let us now work together, stay educated and involved, and value each other's work, to bring about justice in Palestine.

P.S.- Find an event near you to commemorate Rachel Corrie's stand in Gaza, or create your own event and submit it to the Rachel Corrie Foundation.

Video: Rachel Corrie interviewed in Rafah on March 14, 2003, two days before her death ten years ago Rachel Corrie
Rachel Corrie was a 23-year-old American peace activist from Olympia, Washington, who was crushed to death by an Israeli bulldozer on 16 March 2003, while undertaking nonviolent direct action to protect the home of a Palestinian family from demolition.
Since her killing, an enormous amount of solidarity activities have been carried out in her name around the world.
Rachel’s journals and emails from her time in Palestine are available in a variety of forms. They have been published in books, turned into plays and dramatic readings, and used around the internet. They are not always reproduced in their entirety and we have collected them here, un-cut, for easier reading. Read Rachel’s emails from Palestine.

I should at least mention that I am also discovering a degree of strength and of basic ability for humans to remain human in the direst of circumstances – which I also haven’t seen before. I think the word is dignity. I wish you could meet these people. Maybe, hopefully, someday you will.
- Rachel Corrie, in an email to her mother, February 28 2003

MEMORIALS AND ARTICLE ARCHIVES ON RACHEL

Parents of activist Rachel Corrie speak in Ashland
Mail Tribune, OR – Sep 21, 2006
… Rabbi David Zaslow of Temple Havurah Shir Hadash in Ashland, said, “The incident that killed Rachel Corrie was a terrible tragedy, and certainly has been …
Theater notes
New York Times
It’s fitting that “THE CLEAN HOUSE” and “MY NAME IS RACHEL CORRIE” start performances on Thursday, since each play, in very different ways, raises the same question: What took so long?

“My Name is Rachel Corrie” was scheduled to open at the New York Theatre Workshop on March 22nd. Amid political pressure, the play was “postponed indefinitely,” and The “Rachel’s Words” initiative was born. It was made up of a broad spectrum of groups and individuals who believed that Rachel’s words and her message of human rights and justice should be heard. “Rachel’s Words” was an event that took place in New York City’s Riverside Church on  March 22, 2006 to keep Rachel’s message form being censored.
No comments: 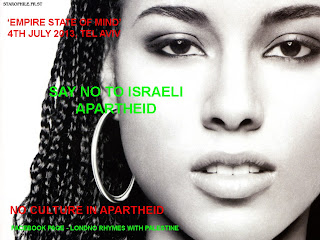 Samer Issawi: We are fighting for all Palestinians