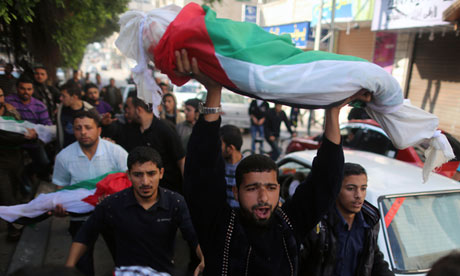 Palestinians carry the bodies of the Dalou children to their funeral in Gaza City. Photograph: Wissam Nassar/Xinhua Press/Corbis
The bodies of four children wrapped in Palestinian flags were carried above a huge crowd from the rubble of their home, destroyed in an Israeli air strike, to their graves on Monday amid mounting anger over the sharply rising toll of civilians in the six-day-old war in Gaza.
Bulldozers, which were clearing concrete and twisted metal from the site of the Dalou family's home in the hope of finding two bodies still trapped beneath the ruins, stopped work to allow the funeral procession to pass.
"Do these children look like terrorists?" asked grief-stricken relatives and neighbours of the dead. Eight members of the Dalou family, including four children aged between one and seven, were killed when a missile struck their three-storey home at around 2.30pm on Sunday. Two family members are still missing, and two neighbours were also killed.
The funeral took place amid a heavy Hamas presence, although the family had no known affiliations with any militant group.
"There has been a drastic change since the beginning of this conflict," said Hamdi Shaqqura of the Palestinian Centre for Human Rights (PCHR) in Gaza. "There is now a complete disregard for human life, shown by the attack on the Dalou family home in the middle of a residential area. This was not the home of a militant."
According to the PCHR, there were 31 civilian deaths in the 24 hours to noon on Monday, whereas in the previous four days there had been a total of 27 civilian deaths. "There has definitely been a big acceleration," said Shaqqura.
At least 18 children have been killed since the start of the conflict last Wednesday, and more than 600 civilians have been injured, he said. The Gaza health ministry said 24 children had been killed.
The total death toll in Gaza topped 100 on Monday following another day of intense bombardment. According to Ashraf al-Kidra of the Gaza ministry of health, the most recent victims included a child killed by flying shrapnel and five farmers. Elsewhere it was reported that a father and son were killed while the man was repairing a water tank on the roof of his home.
Israeli fighter planes targeted a high-rise building containing the offices and studios of local and international media organisations in the centre of Gaza City for a second time. Ramez Harb, the head of Islamic Jihad's media operations, was killed and at least six were wounded.
Black smoke billowed from the building after it was struck by three missiles. Witnesses reported chaotic scenes as paramedics tried to reach the injured while firefighters tackled the blaze.
The Israeli Defence Forces (IDF) said the building was a "hideout" used by Islamic Jihad. In a statement it said: "The Palestinian Islamic Jihad operatives, who were involved in firing rockets at Israel, were inside the media building when it was targeted."
The IDF spokeswoman Avital Liebovich tweeted: "The presence of senior Islamic Jihad militants in media building in Gaza demonstrates the ongoing tactic of using civilian [buildings] as shield."
The reason for the targeting of the Dalou family home remained unclear. Two Israeli papers reported that the IDF had targeted the wrong house, while a third said it was targeted in the belief that a Hamas militant was inside.
Neighbours told reporters that the Dalou family had no connections with militant organisations and that the father – who was not at home at the time of the air strike – owned a grocery shop.
Israeli intelligence tracks militants by their use of mobile phones, informants and evidence gathered by unarmed surveillance drones.
In the first two days of the offensive, Israel focused its firepower on military training grounds, rocket-launching sites and weapons stores. It has since turned to targeting the homes of militants, increasing the likelihood of killing civilians in the densely populated residential areas of Gaza City.
The IDF said it had struck 80 targets in Gaza on Monday. More than 120 rockets had been launched from Gaza, with 42 landing in Israel, it said. Three Israelis were slightly injured
.