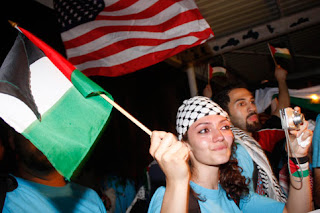 International activists from the Viva Palestina US delegation arrive into the Gaza Strip from Egypt, 15 July 2009. (Hatem Omar/MaanImages)

As soon as I arrived home I felt a great relief, if that is the right word. I have been unable to return to Gaza before because of Israel's winter invasion and the ongoing siege. I am not sure that the word relief summarizes my intense and conflicting emotions. Mixed feelings of relief, happiness, but also disorientation continued to overwhelm me. Gaza my beautiful home, yes my beautiful home, my beautiful people, who are trying so hard to live. To continue from one day to another. Despite the odds, the hardships, the deaf ears of the world.

The same day I arrived home, 9 July, I could see from my balcony the rubble of what at one time was Yasser Arafat's headquarters. The whole building was completely demolished, leveled to the ground, blowing out the windows on one side of my apartment building. It is the same place where one of my cousins was killed the first day of Israel's assault in December.

I now see a different Gaza, and it is not the Gaza I have known, it is like a city after an earthquake.

Many of the historically important buildings were leveled to the ground. I decided to postpone my field visits to the different areas where the assaults were the most savage and brutal. I thought it might be a good idea to wait for the arrival of the delegation of US citizens who were due to cross the border.

In the meantime, I met some dear friends and coworkers who came to say hello. All of them were loaded with war stories and the panic they faced during the attacks against Gaza. One friend who was a political prisoner, who spent 15 years in the Israeli jails said to me, "I never felt afraid of anything there like the fear I felt this time." I find it strange to even write this sentence, but while we Palestinians are determined to continue our struggle, the reality is that this assault against Gaza was severe and fierce, and cannot be forgotten -- we will feel its effects as a people for a long time.

Our friends from the US were only granted visas from Egypt to visit Gaza for 24 hours. As I waited I pondered, "How can we condense or begin to understand what children, women and men went through during 23 days of the assault in a 24 hours visit?"

Upon the arrival of the Viva Palestina US delegation, I sat at the borders to receive the delegation with some colleagues from PNGO (Palestinian Non-Governmental Organizations' Network). It was a touching and affectionate moment for me, to see American, British, and French activists of different ages and ethnicities united under one goal and voicing to the world: "Gaza you are not alone, you are not forgotten, despite the shameful stand of the governments of the world, we stand with you, the people of Gaza!"

We had to get to work immediately, and were fortunate to have a solid team of colleagues. I was accompanied by Barbara Lubin, Director of the Middle East Children's Alliance (MECA), Reem Salhi, an activist lawyer and human rights advocate, Danny Muller, a MECA colleague, Travis Wilkerson, a filmmaker and professor, Jaiel Kayed, a Palestinian-American computer expert, Talal Abu Shaweesh, Director of New Horizons, and Mohammed Magdalawi, a student from Gaza and MECA volunteer.

In the Nuseirat refugee camp, we were invited by New Horizons to see the activities of their project loosely translated as "Let them Play and Heal," a program treating childhood trauma sponsored by MECA. The project involves activities for mothers and their children to help the children recover after the war trauma. There were around 500 kids, 6-12 years old boys and girls with their mothers attending. We had the chance to see the little faces of hundreds of happy children, singing along with a traditional debka dance performance.

We then visited the al-Bureeg School, where MECA has implemented water purification and desalinization systems to provide clean drinking water for schoolchildren. This is one of three water treatment projects MECA has recently implemented in the refugee camps, and we aim to build many more with the help of our friends and allies. We then moved to the north and while the van was going on, we could clearly see many demolished homes everywhere, and tent cities around the homes where families now lived.

We could not miss the Zaytoun area, where one of the many tragic events of the war occurred at the home of the Samouni family. The van went through neighborhood after neighborhood, through areas of vast destruction. How can I convey to you what I have seen in the little faces, eyes of sadness mixed with hope and excitement? On top of that some of the kids who had broken or missing arms and legs, post-operative scars, who are living in the rubble of their former homes, and with their little voices they tried to tell us their stories.

I listened to their stories. I stopped writing about the rest of our activities, the rest of our day, the rest of my return home. At that moment I felt, and still feel, "I don't want to hear or listen, I just want to cuddle these children and help them to forget." But I want the world to remember what was done here in Gaza, and that those of who are picking up the pieces, as hard as we try, we cannot forget.

Mona El-Farra is a physician by training and a human rights and women's rights activist in practice in the occupied Gaza Strip. Her blog is From Gaza, with Love.