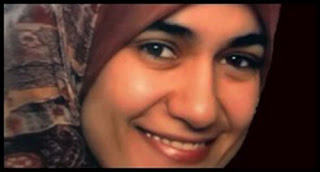 To: German Embassy in Cairo and German Counselor

Your Excellency Mr.Bernd Erbel, the Ambassador of Germany in Cairo.
Wish this line finds you well. This is an initiative to write you on the issue of the unfortunate killing of Mrs. Marwa El Sherbini in Dresden Court Room on July 1st, 2009. I want to share with you and the German officials our point of view on the issue as you are the Official representative of the Germany. As an Egyptian citizen I am deeply concerned and discontent about what happened to the Egyptian citizen Marwa Elsherbini in the Court room of Dresden on July 1, 2009 when she was stabbed 18 times by Mr. Alex within the place - the court- where she should have been safest. It is the place where should get her rights back and she has already obtained it thanks to the Court however, the convicted person did not stop at verbal aggression because of Marwa's religious affiliation, but physically assaulted her in the place where she must have been protected? Because of all that I ask: How did this happen? And why her husband was also shot by the police when he was trying to help his wife? How Marwa was not protected once she was approached by the perpetrator? How come she got 18 fatal stabs before there was any help or protection? How will the trial of the killer would go? We want full transparency and sharing of the information to the Egyptian public until the trial is complete. Finally, why is not any statement or news on the website of the German Embassy in Cairo? Cairo is the capital of the State on which Marwa is a fellow citizen and she was killed in an official German government building on a German soil? Sir; I expect your response and your attention to this matter because we as Egyptian citizens have the right to know the whole truth. We would appreciate your attention, which will prove our respect and admiration to the German people first and the German state. Not giving enough attention to our concerns as Egyptian citizens would cause discontent to Germany and would initiate campaign of objection to the German state's position in every newspaper and local media, or proper and legal means to have our voices heard. A global boycott of German products and German institutions, or travel to Germany would be appropriate too. We respect the citizens of Germany and the State but, we can no longer respect if Germany does not respect Egyptian citizens at German official institutions. This is a letter in a series of letters to different German Officials such as H.E. The German Chancellor Angela Merkel and institutions in Cairo and around the world and to related Egyptian official institutions. Today(07/07/2009), Egypt's Attorney-General asked the Egyptian Ministry of Foreign Affairs a report on the details of the Killing of Marwa Elsherbini. We are all hope that this is the first official procedures to ensure the protection of Egyptian citizens everywhere. Please accept our assurances of our highest consideration and we will be looking forward to your feedback