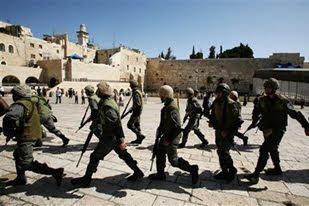 Jordanian and Palestinian officials have condemned the Israeli security forces for storming Jerusalem's al-Aqsa mosque on Sunday during clashes that left many Palestinian worshippers wounded.

Deploring the Israeli action, the officials said it amounted to a "violation of the mosque's sanctity".

Trouble had broken out after a group of about 150 Israelis turned up and entered the mosque compound, reportedly under the guard of local authorities, on the occasion of Yom Kippur, the Jewish holy day.

"Both international law and relevant conventions and resolutions call for protection of places of worship against any violations", he said.

"We decry the repeated storming of the mosque by extremist Jewish groups and Israeli forces as a provocation that would exacerbate tension and ignite further violence that threatens regional security and stability."

Jordan's foreign ministry summoned the Israeli charge d'affaires in Amman to denounce the raid, saying that it came at "a time of concerted international efforts for resumption of peace talks" to find a solution to the Palestinian-Israeli conflict.

Saeb Erekat, the chief Palestinian negotiator, said the Israeli security forces' action was a deliberate provocation in support of unwelcome settler hardliners who opposed an end to the Israeli-Palestinian conflict.

Noting that riots during Yom Kippur were becoming an annual event, Erekat compared Sunday's scuffles to the violence that followed the trip to the site in the year 2000 by the ex-Israeli PM Ariel Sharon.

"We've seen this before, and we know what the consequences are," Erekat said in a statement. "

"Providing a police escort for settlers who are against peace at all costs, and whose presence is deliberately designed to provoke a reaction, are not the actions of someone who is committed to peace, but of someone who will go to extraordinary lengths to scuttle all hopes of peace," Erekat said.

The Al-Aqsa Foundation had warned a few days earlier that Israeli authorities were planning to permit settlers entrance to the area. Officials in East Jerusalem predicted that the break-in would occur on Sunday under the pretext of marking Yom Kippur.

Jews refer to sections of the mosque complex as historically part of their Temple Mount.

Clashes also erupted near Majlis Gate, one of the main entrances to the mosque, after police prevented worshippers from entering the area, according to witnesses. More clashes followed noon prayers near the Lions' Gate entrance to Al-Aqsa.

Last year, a similar incident on the Yom Kippur holiday resulted in damage to dozens of cars and shops.

Israel captured the Old City of Jerusalem during the 1967 Six-Day War and later annexed it along with the rest of mostly Arab East Jerusalem in a move not recognised by the international community.