Obama's peace effort has failed but our struggle continues 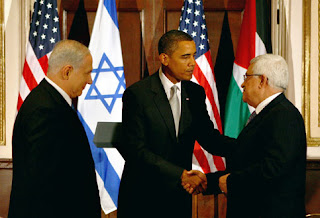 There is the old joke about a man who is endlessly searching on the ground beneath a street light. Finally, a neighbor who has been watching him asks the man what he is looking for. The man replies that he lost his keys. The neighbor asks him if he lost them under the streetlight. "No," the man replies, pointing into the darkness, "I lost them over there, but I am looking over here because here there is light!"

The intense focus on the "peace process" is a similarly futile search. Just because politicians and the media shine a constant light on it, does not mean that is where the answers are to be found.

The meeting hosted by US President Barack Obama with Israeli Prime Minister Benjamin Netanyahu and Fatah leader Mahmoud Abbas at New York's Waldorf Astoria hotel on 22 September signaled the complete and terminal failure of Obama's much vaunted push to bring about a two-state solution to the Palestine/Israel conflict.

To be sure, all the traditional activities associated with the "peace process" -- shuttle diplomacy, meetings, ritual invocations of "two states living side by side," and even "negotiations" -- will continue, perhaps for the rest of Obama's time in office. But this sterile charade will not determine the future of Palestine/Israel. That is already being decided by other means.

Before coming to that, let's recall those heady days in May when Secretary of State Hillary Clinton set out the Obama Administration's firm policy on Israel's colonization of the West Bank: "We want to see a stop to settlement construction -- additions, natural growth, any kind of settlement activity -- that is what the president has called for."

Obama's envoy, former Senator George Mitchell, traveled to the region almost a dozen times to convince Israel to implement a freeze. Every proposal he took, the Israelis rejected. And to emphasize the point, the Israeli government accelerated the approval of major new settlement plans. Instead of threatening consequences for such intransigence, Mitchell simply diluted American conditions to meet Israeli objections until finally there was little left of the American demands -- or credibility.

So it was that in his remarks at New York, Obama's call for a total construction freeze was reduced to a polite request to Israel merely to "restrain" itself from devouring more Palestinian land.

Speaking to reporters after the New York meeting, Mitchell dropped the demand for a settlement freeze and made the US surrender official. "We are not identifying any issue as being a precondition or an impediment to negotiation," Mitchell said, adding, "We do not believe in preconditions. We do not impose them and we urge others not to impose them."

This is of course completely untrue. The Obama Administration, like the Bush Administration before it, continues to boycott Hamas (which has a legitimate electoral mandate to represent Palestinians under occupation) on the grounds that Hamas has refused to meet one-sided American preconditions!

The next day in his UN speech, Obama repeated the call for negotiations without preconditions. He did not explain why such negotiations would be any more fruitful than the 200-odd negotiating sessions held between the PA and the previous Israeli government headed by Ehud Olmert. Obama may have told the UN that the peace process must "break the old patterns," but he is simply repeating them.

The New York meeting produced yet another image of an American president cajoling reluctant Israeli and Palestinian leaders to shake hands, a kitschy and tiresome reprise of the famous 1993 White House lawn handshake between Yasser Arafat and Yitzhak Rabin with President Clinton looking on, that sealed the ill-fated Oslo accords. Unsatisfied by its failures to date, the Obama Administration apparently craves more. It aims for a resumption of "negotiations" within weeks, to be inaugurated with what a US official called a "launch event." Ideas under discussion, the unnamed US official told the Israeli daily Haaretz, include "a meeting in Sharm al-Sheikh in Egypt."

That this is the level of thinking within the Obama Administration is utterly depressing. I can see it now -- as we have so many times before -- another meeting at the Egyptian resort attended by all the usual suspects: Israeli and Palestinian leaders (except of course Hamas), "moderate" leaders of repressive US client regimes like Jordan's King Abdallah and Egypt's President Hosni Mubarak, and the whole pack of peace process parasites led by Quartet representative Tony Blair and EU "High Representative" Javier Solana. We can expect more statements that there is a "window of opportunity," that this is "the only game in town," and that "time is running out."

If this is not absurd enough, consider what the US is really saying to the Palestinians in the wake of Mitchell's failure: "We, the greatest superpower on Earth, are unable to convince Israel -- which is dependent on us militarily, economically and diplomatically -- to abide by even a temporary settlement freeze. Now, you Palestinians, who are a dispossessed, occupied people whose leaders cannot move without an Israeli permit, go and negotiate on much bigger issues like borders, refugees, Jerusalem and settlements, and do better than we did. Good luck to you."

Even if Israel agreed to a settlement freeze and negotiations resumed, there is no chance for a viable two-state solution or any just resolution coming out of such talks. So like its predecessors, this administration is substituting process and gimmicks for substance.

If the "peace process" is not driving events, then what is? Israeli colonization -- as Obama initially understood -- is the major factor determining the present and future of Palestine/Israel. Geographer and former Israeli deputy mayor of Jerusalem, Meron Benvenisti, has observed that Israel's 1967 occupation of the West Bank and Gaza Strip effectively ended the 1948 partition. "The decades since the war have proved that 1967 was not a disjunction but quite the opposite, a union, and that the preceding period was merely a reprieve," Benvenisti wrote in 2007.

After more than 40 years, Benvenisti views the "occupier/occupied paradigm" as too limited and misleading to describe the post-1967 reality. It is, he writes, an "anachronism that hides behind the portrayal of a temporary condition." He proposes instead that we call the situation in Palestine/Israel a "de facto binational state ... because it describes the mutual dependence of both societies, as well as the physical, economic, symbolic and cultural ties that cannot be severed except at an intolerable cost."

Repartition of Palestine would only change the shape of the conflict, not solve it. Even if Palestinians in the West Bank and Gaza Strip were given a state, an unreformed, ultranationalist "Jewish state" of Israel would be more likely to turn its aggression and ethnic cleansing against its own 1.5 million Palestinian citizens than live in peace. After all, as Israeli Foreign Minister Avigdor Lieberman has asked repeatedly, what is the point of a two-state solution that doesn't produce an exclusively Jewish state?

The 1967 boundary may have legal and political salience, but it does not demarcate geographically compact, ethnically homogenous and economically independent geo-political units. Ramallah Palestinian Authority (PA) Prime Minister Salam Fayyad may harbor fantasies about creating a "de facto" Palestinian state in the West Bank, but the close collaboration between Israel and the PA only confirms the trend towards binationalism -- of the wrong sort to be sure.

Isn't it ironic that the most enthusiastic boosters of the ugly collaboration between the Israeli occupation army and US-trained PA militias to suppress resistance to the occupation, simultaneously insist that it is implausible for Palestinians and Israelis to build a joint society under conditions of equality? Apparently Palestinians and Israelis can collude to maintain oppression and injustice but not to transcend them!

A second factor determining the present and future is the resistance in all its forms that Israeli colonization continues to generate: the movement of Palestinians within Israel for full equality in a state of all its citizens; the refugees' steadfast insistence that Israel not be allowed to prevent them returning home just because they are the wrong religion; the refusal of Palestinians in Gaza to buckle under a crippling blockade. During Ramadan, hundreds of thousands of fasting Palestinians endured unbelievable hardships to break Israel's ring of steel around Jerusalem to enter the occupied city for Friday prayers at al-Aqsa Mosque.

This spirit of resistance is expressed in millions of daily acts and refusals by individual Palestinians, but also in highly directed, creative and organized ways such as the weekly demonstrations against Israel's apartheid wall in the West Bank, or the rapidly expanding Palestinian-directed international campaign of boycott, divestment and sanctions (BDS).

These forms of organized resistance and solidarity are changing the balance of moral and political power and have the potential to force Israeli Jews to abandon their quest for ethno-religious purity and domination just as Afrikaners did in South Africa, Unionists did in Northern Ireland, and white Americans did in the southern US. They are bolstered by the growing calls for international accountability, the most recent of which include the Goldstone report's recommendation that Israeli leaders be prosecuted for war crimes and crimes against humanity in Gaza.

Official complicity with Israel's crimes -- such as the Obama Administration's despicable decision to attack and quash the Goldstone report -- are likely only to spur further support for BDS. These sources of power are still comparatively small compared to Israel's military and diplomatic might, but their momentum is increasing and official Israel's panic in the face of the growing challenge is palpable.

For years, scholars and activists calling for serious research and discussion about a unified state guaranteeing the rights of all who live in it, were ignored or ridiculed by defenders of the failed two-state solution. But the growing appeal of a vision that inspires and attracts individuals because of its universalism is terrifying the high priests of partition. The peace process industry, its think tanks and "experts," understand that they can no longer monopolize the discussion. Peace will not be made at the Waldorf Astoria in Manhattan; it will be made everywhere that people of conscience are prepared to join the struggle for liberation, justice and equality for all the people who live in Palestine/Israel.

In one sense then, the significance of the New York meeting was its utter insignificance. The real struggle for justice carries on regardless.

Co-founder of The Electronic Intifada, Ali Abunimah is author of One Country: A Bold Proposal to End the Israeli-Palestinian Impasse.