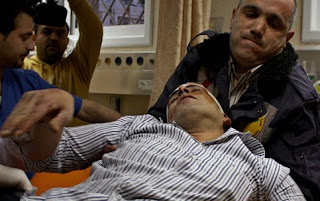 An injured Palestinian is taken to an emergency room after he was shot by Jewish settlers in the West Bank village of Urif near Nablus, April 2009. (Rami Swidan/MaanImages)

Israeli peace activists are planning to ratchet up their campaign against groups in the United States that raise money for settlers by highlighting how tax exemptions are helping to fund the expansion of illegal settlements in the West Bank.

Gush Shalom, a small peace group that advocates Israel's withdrawal from the occupied territories, is preparing to send details to the US tax authorities questioning the charitable status of several organizations.

Adam Keller, a spokesman, said these operations' tax-exempt status meant that "settlement expansion is effectively being subsidized out of the pockets of the US taxpayer and government."

The campaign is designed to increase pressure on Barack Obama, the US president, to demand action from Israel on his repeated calls -- so far largely ignored -- to end settlement building. Last week, Israel announced plans to build 455 new homes in West Bank settlements and 500 apartments in East Jerusalem.

Obama is expected to unveil a Middle East peace plan this month.

In a related move, Gush Shalom is encouraging Palestinians who have suffered from settler violence to file lawsuits in the United States that would redefine the settlers' fund-raising work as support for "terrorist activity."

The peace group has accelerated the pace of its campaign, according to a "confidential memo" it issued on 29 July that was leaked to the Israeli media, after the Israeli government heavily criticized human rights groups over the summer for receiving funds from foreign donors, particularly European governments.

In particular, the foreign ministry lambasted Breaking the Silence, a group of army veterans, for publishing testimonials from 26 Israeli combat soldiers suggesting the army committed war crimes during its assault on Gaza last winter.

Keller said: "It's the height of chutzpah for the foreign ministry to be hounding Breaking the Silence, which is doing something entirely legal and transparent, while keeping quiet about the settler organizations' dependence on foreign income for their illegal activities."

Gush Shalom said it was not divulging details of the organizations it will target next month to ensure an element of surprise. But Keller said all of the 120 main settlements, which are illegal under international law, benefit from fundraising operations in the US.

Gush Shalom has already accused one organization, Shuva Israel, which is registered as a charity in Austin, Texas, of channelling funds to the Shomron Liaison Office, located in the West Bank settlement of Revava, south of the Palestinian city of Nablus.

According to Shuva Israel's website, donations are used to support several outposts close to Revava, such as El Matan, Havat Gilad and Havat Yair, which are illegal under Israeli law.

The 100 or so outposts, satellites of the main settlements, have been the settlers' most effective method of extending their control over Palestinian territory in the West Bank. Israel has repeatedly promised the United States it will dismantle the outposts -- so far to no effect.

Shuva Israel also funds Yitzhar, a settlement that hit the headlines last year when its inhabitants rampaged through the neighboring Palestinian village of Asira al-Kibliyeh in what the prime minister at the time, Ehud Olmert, called a "pogrom."

Referring to Shuva Israel and the Shomron Liaison Office, Keller said: "From our investigations it is unclear whether these are actually two organizations with close links or two faces of the same organization."

David Halevy, the head of Shuva Israel, told The Jerusalem Post that donations subsidized projects in West Bank settlements and outposts such as schools, libraries, youth centers and empowerment training for women.

Keller said most of the organizations were quite open about their fundraising activities, but that donations in support of the settlements almost certainly broke the terms of the US tax-exemption laws.

"On the public relations side they say they are involved in humanitarian and non-political work, but to their supporters they play up their assistance for the settlers' nationalist and expansionist activities. This is the way we hope to catch them out."

A recent report by the International Crisis Group (ICG), a group of academics and former diplomats, identified several other settler organizations fund-raising in the United States.

It noted that the settlement of Sussya in the South Hebron Hills raised funds through a tax-exempt US organization called PEF Israel Endowment Funds, registered in Manhattan. In 2007, Forbes, the business magazine, ranked PEF as one of the 200 largest charities in the US.

Other US tax-exempt charities named were the One Israel Fund, which raises money for projects in outposts, and the Hebron Fund, which raises an average of $1.5 million a year on behalf of a few hundred extremist Jewish settlers encamped in the middle of Hebron.

The One Israel Fund claims on its website to be "the largest North American charity whose efforts are dedicated solely to the citizens and communities of Yesha," a Hebrew acronym for the West Bank.

According to the ICG report, Christian Zionist groups also raise significant sums for the settlements. One website, Christian Friends of Israeli Communities, lists dozens of youth and community projects in the settlements it funds.

An investigation last month by the Israeli daily newspaper Haaretz revealed that a group called American Friends of Ateret Cohanim had received tax-exempt status by claiming to fund educational institutes in Israel. In reality, however, it had transferred $1.6 million to Ateret Cohanim, an extremist settler group, which buys Palestinian land and homes in East Jerusalem, especially in the Muslim quarter of the Old City.

Gush Shalom also hopes to increase pressure on the funding of organizations by encouraging civil litigation in the United States from Palestinian victims of settler violence in a bid to characterize the attacks as "terror activity."

Court rulings would then be sought to shut down the settlers' US fund-raising arms on the grounds that they support terrorism, in an echo of legal action by right-wing Jewish groups in the US against Muslim charities.

Two additional campaigns are mentioned in the memo.

In the coming months the group plans to highlight the links between the settlements and such large international Zionist organizations as the Jewish National Fund (JNF) and the World Zionist Organization (WZO).

The JNF funds Canada Park, established on three Palestinian villages in the West Bank, and the WZO is widely regarded as being implicated in the establishment of the outposts. In July the WZO announced that it would spend $5.5 million this year on agricultural projects for the settlers.

Gush Shalom also suggests exposing the Israeli government's support for US lobby groups, such as Stand With Us and the Israel Project, that are engaged in what it calls "propaganda" on behalf of the settlements.

Jonathan Cook is a writer and journalist based in Nazareth, Israel. His latest books are Israel and the Clash of Civilisations: Iraq, Iran and the Plan to Remake the Middle East (Pluto Press) and Disappearing Palestine: Israel's Experiments in Human Despair (Zed Books). His website is www.jkcook.net.

A version of this article originally appeared in The National, published in Abu Dhabi.