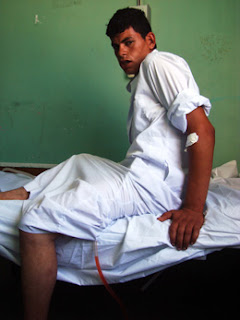 On 31 August, Israeli gunboats shot at and shelled the fishing trawler of Khaled al-Habil, destroying it completely and leaving the boat's 18 fishermen and their families without a source of income.

One week earlier, on 24 August, Israeli soldiers along Gaza's northern border shot dead a young farm worker, Said al-Hussumi. Sixteen-year-old al-Hussumi was killed while working on land a few hundred meters from the border with his cousin Masoud Tanboura, who was seriously wounded.

"We were working in Attatra, near the sea, about 350 meters from the [border] fence," said Tanboura of Beit Lahiya.

Tanboura's survival is miraculous as his chest cavity was pierced from left to right by a bullet. After seeing his cousin fall dead upon being shot in the chest, Tanboura ran and walked what he estimates was a kilometer, bleeding heavily from his chest, until he came across farmers with a donkey cart. He was transported by donkey cart until a car was able to take him to the Kamal Adwan hospital.

"There was no warning," Tanboura said from his hospital bed. "The Israelis started shooting as soon as we got to the land."

Farm laborers working for 20 to 30 shekels ($5-$6) a day, the two youths had been scouring for pieces of metal to use to fence off the plot of land. They had gotten closer to the border, but this was normal.

"We went there all the time," said Tanboura. "The Israeli soldiers always saw us, they knew we were just taking metal. Many people go there to take metal from destroyed houses," he said.

According to Tanboura, his cousin's dead body was dragged across the ground by Israeli soldiers who took the corpse to Israel and returned it hours later via the Erez crossing.

Tanboura, like some of his brothers, used the meager salary from day labor on farms to support the 15 other siblings in his family.

On 4 September, 14-year-old Ghazi al-Zaneen from Beit Hanoun was killed when an Israeli soldier shot him in the head. Along with his father, uncles and some of his siblings, the youth had gone to collect figs on their land east of Beit Hanoun. Although it is near the border with Israel, the farmland where al-Zaneen was killed is still more than 500 meters away.

"They had driven to the land and were walking in the area. Ghazi got up on the rubble of a house to look further. Then the Israelis started shooting heavily. Everyone lay on the ground. When the shooting stopped, they got up to run away and realized that Ghazi had been shot in the head," said his aunt.

Maher al-Zaneen, Ghazi's father, testified to the Palestinian Centre for Human Rights that Israeli soldiers continued to fire as he carried the injured boy to the car. Ghazi al-Zaneen succumbed to his critical head injuries the following day.

The day after his death, Ghazi's mother sat surrounded by female relatives and friends. She asked, "How would mothers in your country feel if their sons were killed like this? Don't your politicians care that Israel is killing our children?"

Israeli authorities reportedly claimed that "suspicious Palestinians approached the fence" and troops responded by "firing into the air." But the shot to Ghazi al-Zaneen's head and the two bullet holes in Maher al-Zaneen's car suggest otherwise.

Since the end of Israel's three-week winter invasion of Gaza during which approximately 1,500 Palestinians were killed, nine more Palestinian civilians have been killed at sea or on the strip's border regions. This includes four minors and one mentally disabled adult. Another 30 Palestinians, including eight minors, have been wounded by Israeli shooting and shelling, including by the use of "flechette" dart-bombs on civilian areas.

According to the Food and Agricultural Organization, roughly one third of Gaza's agricultural land lies within the Israel's unilaterally-imposed "no go zone," or "buffer zone." This band of land stretching south to north along Gaza's borders to Israel was established in late 2000 during the second Palestinian intifada. Initially set at 150 meters, it has varied over time. At one point, it was nearly two kilometers in the north and one kilometer in the east. At present, Israeli authorities say 300 meters along the border are "off limits" and those found within the area risk being shot at by Israeli soldiers.

However, one case demonstrates that Israeli soldiers will shoot at Palestinian civilians as far away from the border as 1,800 meters. Sixty-three-year-old Fawzi Ali Qassem was on his land east of Beit Hanoun, at least 1,800 meters away from the border, when Israeli soldiers opened fire on farmers. Ali Qassem was hit in his left thigh on 23 August 2009.

Under a brutal 27-month-long siege, the Israeli military is killing fishermen, farmers and other civilians in areas it is deliberately trying to depopulate. This represents yet another component in Israel's matrix of control over the lives of Palestinians in Gaza. In the face of such blatant Israeli military terrorizing, Palestinians remain defiantly resilient, farming, fishing and living under fire.

Eva Bartlett is a Canadian human rights advocate and freelancer who arrived in Gaza in November 2008 on the third Free Gaza Movement boat. She has been volunteering with the International Solidarity Movement and documenting Israel's ongoing attacks on Palestinians in Gaza. During Israel's recent assault on Gaza, she and other ISM volunteers accompanied ambulances and documenting the Israeli attacks on the Gaza Strip.