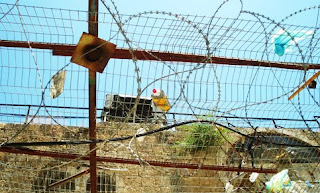 According to the Abrahamic religions, that is to say Judaism, Christianity and Islam, Hebron is where human civilization started. It now appears to me to be where it is tearing itself apart. The ideological and actual struggle between the Palestinian population and the Jewish Israeli settlers is fraught with hatred and violence and while walking through the now dilapidated markets of the Old City or the deserted streets of the Israeli settlement, a sense of intransient destruction pervades.

Trade and activity in the antiquated souq or market of the Old City is sluggish at best due to the strangulation by the settlement developments and the forced closure of hundreds of shops. Some resilient traders remain. "This shop has been in my family for more than 60 years and I will stay here till I die" said Jamal, a Hebron market trader.

In the alley outside his store there is wire mesh and fencing overhead to protect those walking below from the waste that the settlers throw down from above. "They throw on to us dirty nappies, used toilet paper, waste water, half-full cans of drink," seethed an angry but defiant young man who still lives with his family in the Old City. The proof is there for all to see rotting on the wire mesh in the mid-day sun.

Once inside the Jewish Israeli settlement there was a complete absence of any signs of life or activity. All of the shops were barricaded and the trees and shrubs were reclaiming the buildings. To demarcate this desolate territory as exclusively Jewish all of the shop fronts have been sprayed with the Star of David along with plenty anti-Arab graffiti. One can't help but feel that there is either a complete misunderstanding or disregard for history. Didn't the Nazis mark all Jewish properties in the same manner?

While searching for signs of life I found a small group of children playing on a brightly colored playground flanked by an army watchtower. It was a strange juxtaposition that poignantly reflected the settlers' attempts to create a semblance of normality in this hostile home. I spoke to one of the adults sitting nearby and although he wasn't prepared to be interviewed himself, he arranged for me to meet with the official spokesperson for the Jewish community in Hebron, David Wilder. I challenged David about the rubbish thrown down on his Palestinian neighbors and he reasoned, "We have been trying to clean that for a number of years but we have been prevented because it can be used as a serious piece of propaganda against us. One has to remember that for many years people were physically attacked, even killed ... and there were times when some people, especially the younger folk, had difficulty controlling themselves."

The settlers live completely separated from the Arab community in a fortified complex dominated by barbed wire, concrete roadblocks, army watchtowers and a road network reserved exclusively for Jewish Israelis. Throughout the markets they have occupied the upper floors of many of the buildings and in some cases, they control whole streets that are barricaded with steel gates and barbed wire. Consequently, they can roam through the upper floors of the sealed buildings and the overhead passageways almost completely out of view of their unwanted neighbors. Normal interaction between the two communities is non-existent.

The click click of rotating turnstiles and the bleep bleep of metal detectors is not the sound one usually associates with the entrance to a place of worship. It is unfortunately the welcome received at the Ibrahimi mosque in the heart of Hebron's Old City. As well as being the supposed burial place of Abraham, Isaac and Rebecca, Joseph, Jacob and Leah, it is also the site of one of the most barbaric incidents in Palestine's recent history. During morning prayers on 25 February 1994, in the month of Ramadan, a Brooklyn-born settler by the name of Dr. Baruch Goldstein burst into the mosque in Israeli military uniform and opened fire on the prostrating worshipers. By the time he was overwhelmed and killed he had managed to murder 29 men and boys and wounded almost 200 more. It is shocking and depressing that his tomb and memorial are to this day sites of pilgrimage for ultra right-wing Zionists.

In the eyes of the settlers the real breakdown in trust and coexistence between Palestinians and Jews in Hebron was in 1929 with the murder of 67 Jews by Palestinians and the expulsion of the remaining community by the British. The immorality of this act is undeniable but the question of causality has to be raised. Was it not the case that the violent breakdown in Arab-Jewish relations in Palestine was because of the stated designs of the Zionists to take over the whole country for Jewish domination?

David Wilder's response was categorical. "No, not at all! The fact is Hajj Amin al-Husseini [the Palestinian grand mufti at the time] was a tremendous Jew hater and anti-Semite. In 1929 it was the period before the war of independence when Zionism was still a very small movement ... the land was pretty much desolate." This is very thin ice to tread. By 1929 the Balfour declaration had been signed and the Zionists had the support of the British for their homeland in Mandate Palestine. Arab fears and resentments were very real and justified. That the land was pretty much desolate is a myth that has been categorically disproved so many times, and often by Israeli sources, that it's not necessary for me to dispute it here.

The power of the settler communities is growing. Most of their support and money comes from ideological Zionists, particularly from the US, who have a firm belief in the creation of a Jewish homeland in all of Eretz Israel with all of Jerusalem as its capital. I wanted to know if David thought that if Israel were to be guaranteed its security in a final political solution, then the Palestinian people should be granted a viable and sovereign state of their own. His answer was very telling: "Of course, they can form a state in Sinai [Egypt's desert peninsula] if they want ... or east of the Jordan river in the country that is today called Jordan." In essence, he means there is no place for the Palestinians in Palestine!

Many Israeli apologists try to portray the disastrous colonization of Hebron as the workings of a group of fundamentalists living in a messianic fantasy world outside of mainstream Israeli society. However, the Israeli government provides approximately 4,000 soldiers to protect the community of 500 to 800 settlers and it builds the settler-only roads, the watchtowers and the fortifications. With such blatant and explicit support from central government it is not credible to dismiss this as the workings of a fringe group of extremists. The continued presence of the settlements in Hebron is fomenting an engrained culture of violence, distrust and hatred and it is with the Israeli government that the buck must stop for this downward spiral.

Zak Brophy is a freelance print and broadcast journalist from the UK and has been living between London and the Middle East for the past six years, including Egypt, Palestine, Syria, Jordan and Lebanon.