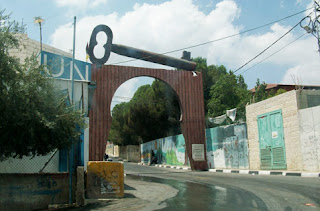 A large key atop the entrance to the Aida refugee camp symbolizes the homes lost by Palestinian refugees during the dispossession. (Dina Elmuti)

Feeling as insignificant as an insect, I waited while the soldier monitoring the fortified checkpoint behind the bulletproof booth inspected our passports. After a few moments of standard scrutiny, our passports were returned and we were sent on our way with a smug wave of the hand. We made our way around the twists and turns of Israel's massive wall that cuts through Bethlehem, surrounding towns and neighborhoods. The hideous obstruction is adorned with resistance art that serves as a guide to our destination: the Aida refugee camp.

In sharp contrasts, Aida camp is located behind the opulent Jacir Palace Intercontinental Hotel. Home to nearly 5,000 residents, the camp has witnessed countless untold stories of injustice and humble heroism which I have wanted to hear for a long time.

My family and I spent the hot August day among energetic activists, welcoming families and curious children all more than willing to drop whatever they were doing to show us around the place they had all come to call home over the years. It's at places like Aida where one's life is put into perspective. At least, mine certainly was, starting with the first family we were fortunate enough to visit.

We met a selfless father who dedicated his life to raising his five children after his wife was mercilessly killed when an Israeli solider opened fire as she stood by the window waiting for her children to come home from school. "It was during the second intifada," he recounted. "She died a martyr, and the children were so young." Three years later, the sadness still loomed on his face. "She was the love of my life," he said. "Everyone is always telling me to remarry so I could give these children a mother to care for them, but I could never do it. I could never just erase her memory like that. She was my wife." After a few moments, we were met by the excited, high-pitched greetings of the youngest daughters. Excited that the new school year was close to beginning, they looked up at us with bright, big eyes and curiosity.

Later, we were fortunate enough to meet our accommodating guide, Mohammad, a volunteer at the camp who took us around, patiently introducing us to one family after another. Each one graciously invited us into their homes and warmly told us their stories of adversity and how they've continued to overcome it. No one at the camp was immune to hardship, not even our calm and collected guide, who was shot and imprisoned by Israeli forces a few years back. "I was only able to attend two years of school because of prison," he said solemnly with a shrug. That day, I met entire families suffering from cancer, not just one member afflicted by the disease, but entire families. I listened to stories of families who had lost loved ones under the most inconceivable conditions, and I stepped foot in homes that didn't have running water on a daily basis.

I couldn't help but think about how pampered and comfortable my childhood had been compared to that of the children I met that day. Unlike my siblings and I, these children lived without the privilege of being able to simply turn on a tap and receive clean, fresh water to use at their disposal. Instead, they receive insufficient water supplies, through defective water networks and sewage systems, all controlled by Israel.

"We get new water tanks here every three weeks or so, and sometimes we don't. We try our best to conserve it, because otherwise we run out, and then we have to wait for the next shipment. Sometimes we go for more than a week without clean water," one young boy told us. Appearing to be no more than ten years old, he spoke with the awareness and wisdom of one far beyond his years. I tried to imagine what I would do if I had to go a week without showering every day, a luxury we feel so entitled to. When did it become okay to deprive children of the basic human right of access to clean water? More importantly, when did it become okay for the world to look the other way and condone such an injustice after such a problem has become an all-too-familiar recurrence for these children?

As the eye-opening day full of new lessons came to an end, we exchanged our farewells with our newfound friends. As a token of our appreciation to our guide, who had patiently guided us through the scorching heat, my mother handed Mohammad a Coke to drink. Much to my surprise, he declined, but not simply out of politeness or customary Arab pride as I first thought. "Oh please excuse me, I actually don't support any company that supports Israel or its occupation," he told us proudly as he put his hand over his chest, a gesture of gratitude.

In the midst of occupation, drought and political turmoil, the boycott, divestment and sanctions (BDS) initiative had been thriving in parts of Bethlehem, and I couldn't be happier or more proud. Mohammad told us that he had learned about the BDS campaign through the Lajee (Arabic for refugee) Center at the camp. The Lajee Center was established almost ten years ago by a group of the camp's young people who dreamed of bringing about change and strategies to defend the rights that their so-called leaders never had the ingenuity to do.

After recounting the inspiring tale to my friend Rich, a truly selfless activist at the Aida camp who introduced me to the Lajee Center in the first place, I learned more about the birth of the campaign in the camp. He explained that although Lajee was one of the early signatories to the Palestinian call for BDS and practices it within the center, this year has seen a surge of belief within the camp's new generations in the strategy in the wake of last winter's massacres in Gaza.

The people of Aida have endured real calamity yet choose to act productively rather than revel in self-pity, and it's that defiance that defines the people of Palestine. I never cease to be amazed by it. Spending that brief amount of time at the camp made me realize that if its residents could manage to successfully boycott the very goods that help fund their unjust predicament, there would be no logical, moral, or convincing excuse for us not to do the very same in the US, especially with all the choices, resources and freedoms we are so fortunate to enjoy every day.

As I stood in line at the gate, ready to leave Bethlehem, I couldn't help but feel miniscule once again. This time, however, I chose to view things a bit differently. Even if I were considered nothing but a mere insect, a flea at best, in Israel's eyes, I remember once hearing that one just needs to be a flea against injustice. Enough committed fleas biting strategically can make even the biggest dog uncomfortable and transform even the biggest nation. I recognized that if even the youngest residents of the Aida camp could summon the courage to resist the basic humiliations of apartheid and occupation, that I could too, and that I was not alone.

Dina Elmuti is a graduate student in neurobiology at Eastern Illinois University.