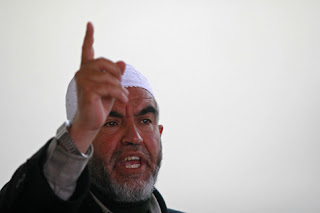 Sheikh Raed Salah has been banned from Jerusalem for 30 days. (Anat Zakai/MaanImages)

The Israeli government announced yesterday it would consider banning Israel's Islamic Movement at the next cabinet meeting, in a significant escalation of tensions that have fueled a fortnight of bloody clashes in Jerusalem over access to the Haram al-Sharif compound of mosques.

The move followed the arrest of the movement's leader, Sheikh Raed Salah, on Tuesday on suspicion of incitement and sedition. Police accused Sheikh Salah of calling for a "religious war" in recent statements in which he warned that Israel was seeking a takeover of the Haram, which includes the al-Aqsa mosque.

Sheikh Salah was released a few hours later on condition that he stay away from Jerusalem for 30 days. The decision was widely interpreted as a move to damp down a possible backlash from Israel's 1.3 million Palestinian citizens, many of whom regard the sheikh as a spiritual leader. Police were deployed in large numbers throughout Jerusalem yesterday.

An Islamic Movement spokesman, Zadi Nujeidat, told the Haaretz newspaper: "We will continue our activities and call for a continued presence in and around the mosque. We are used to arrests."

The move against the Islamic Movement follows a series of pronouncements from Sheikh Salah, echoing statements from Palestinian officials in the occupied territories, that have infuriated the Israeli government.

This week he called on Muslims who could reach the compound -- access to which has been heavily restricted by the Israeli police -- to "shield the [al Aqsa] mosque with their bodies." Sheikh Salah himself has been barred by the courts from entering the Haram compound for several months.

At his annual "Al-Aqsa is in danger" rally in his hometown of Umm al-Fahm in northern Israel last week, he warned tens of thousands of supporters that Israel was trying to prize away control of the compound from the Islamic religious authorities. He added that, should Israel force a choice between martyrdom and renouncing al-Aqsa, "we will clearly choose to be martyrs."

Like many other Palestinian leaders, Sheikh Salah fears that, as well as "Judaizing" East Jerusalem, Israel is engineering a takeover of the Haram -- known to Jews as the Temple Mount because the remains of the destroyed first and second Jewish temples are believed to lie under the mosques.

He has raised repeated concerns that Israel is secretly digging under the mosques, as it did before opening the Western Wall tunnels in 1996. Then, clashes led to the deaths of 75 Palestinians and 15 Israeli soldiers.

A delegation of Palestinian leaders from inside Israel who visited the compound yesterday warned that there was strong evidence of such excavations.

In an interview with Haaretz on Monday, Sheikh Salah also warned against "infiltration of extremist Jewish elements" into the compound -- a reference to Messianic cults that want the mosques destroyed so a third temple can be built.

Muslim leaders throughout the region have expressed growing concern that the Israeli police are secretly escorting such groups into the compound following a decision by Israel in 2003 to allow non-Muslims to visit the Haram without oversight from the Islamic authorities.

Palestinians from the West Bank and Gaza, meanwhile, are unable to reach Jerusalem, and Israel has increasingly limited access to the mosques for Palestinians with Israeli IDs.

During clashes at the compound on Sunday, the Islamic Movement's deputy, Kamal Khatib, and the Palestinian Authority's minister in charge of Jerusalem, Hatem Abdel Khader, were arrested. Both were released on bail and banned from Jerusalem for 15 days.

Calls from Israeli officials for Sheikh Salah's arrest and restrictions on the Islamic Movement have been growing all week.

The cabinet meeting on Sunday will discuss a law to ban the Islamic Movement being drafted by the far-right Yisrael Beiteinu party of Avigdor Lieberman, the foreign minister. The bill is expected to be presented to ministers a week later.

The interior minister, Eli Yishai, of the Shas party, announced on Tuesday he would withdraw funding for imams who "incited" against Israel and was investigating whether he could fire them.

The Islamic Movement has rapidly grown in popularity by focusing on charitable and welfare work and has won control of several councils since the 1980s.

Despite eschewing terrorism, the movement is regarded with great suspicion by Israeli officials, who have shut down its charities and newspaper on several occasions. Sheikh Salah and four other leaders of the Islamic Movement were arrested in 2003 accused of supporting terrorism but released two years later in a plea bargain that significantly reduced the charges.

It is unclear how Israel would ban the Islamic Movement.

Analysts say the government could use the 1945 emergency regulations from British rule but the move would be unlikely to withstand judicial scrutiny. Traditionally, the security establishment has argued that it is better not to push the Islamic Movement underground.

The US state department was reported this week to have expressed concern to Israel that it and the Palestinian Authority not "inflame tensions" over the Haram al-Sharif.

Jonathan Cook is a writer and journalist based in Nazareth, Israel. His latest books are Israel and the Clash of Civilisations: Iraq, Iran and the Plan to Remake the Middle East (Pluto Press) and Disappearing Palestine: Israel's Experiments in Human Despair (Zed Books). His website is www.jkcook.net.

A version of this article originally appeared in The National, published in Abu Dhabi.