Is Canada more pro-Israel than the US? 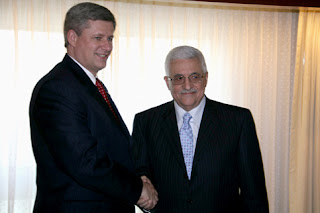 In June, Israel began barring some North Americans with Palestinian-sounding names entry through Ben Gurion Airport. Forced to reroute through a land-border crossing that connects the West Bank with Jordan, their passports were stamped "Palestinian Authority only," which prevents them from entering Israel proper.

The Obama Administration objected to the move by Israel that discriminates against American citizens of Palestinian origin. However, there has been no protest from Ottawa even though Time magazine and the Israeli daily Haaretz ran lengthy articles focusing on Palestinian Canadian businessmen harmed by this new policy. A few weeks ago the Globe and Mail reported that "Although some of the most high-profile cases of individuals being turned away involve Canadian citizens, the Harper government has, so far, made no protest."

This silence bolsters claims by some commentators that under Prime Minister Stephen Harper's Conservative government, Canada has become (at least diplomatically) the most pro-Israel country in the world. Israeli officials concur. After meeting Canada's Foreign Affairs Minister, four other Conservative ministers and Liberal leader Michael Ignatieff in July 2009, Israeli Foreign Minister Avigdor Lieberman, who has openly called for the expulsion of Palestinian citizens of Israel, commented:

"It's hard to find a country friendlier to Israel than Canada these days. Members both of the coalition and the opposition are loyal friends to us, both with regard to their worldview and their estimation of the situation in everything related to the Middle East, North Korea, Iran, Sudan and Somalia. No other country in the world has demonstrated such full understanding of us."

Two days after Harper won a minority government in January 2006, Hamas won Canadian-monitored and facilitated legislative elections. Quickly after assuming power Harper made Canada the first country (after Israel) to cut its assistance to the Palestinian Authority. The aid cutoff, which was designed to sow division within Palestinian society, had devastating social effects.

Ostensibly the aid cutoff was due to Hamas's refusal to recognize Israel. Yet, Canada has not severed relations with Likud-led Israeli governments, which do not recognize the Palestinians' right to a state. Harper explained that "Future assistance to any new Palestinian government will be reviewed against that government's commitment to the principles of nonviolence, recognition of Israel and acceptance of previous agreements and obligations." But support for Israel was never made contingent on "nonviolence" or an end to settlement construction.

In March 2007, Palestinian political factions representing more than 90 percent of the Palestinian Legislative Council established a unity government. Still, the Conservatives shunned the new government all the while claiming to speak regularly (like the Israelis) with Palestinian Authority President Mahmoud Abbas. When the unity government's Information Minister Mustafa Barghouti traveled to Ottawa on a global peace tour, Foreign Affairs Minister Peter MacKay refused to meet him. Barghouti, who represents a secular party, explained at the time that "I think the Canadian government is the only government that is taking such a position, except for Israel." Barghouti had already met the foreign ministers of Sweden and Norway, the secretary-general of the United Nations and then US Secretary of State Condoleezza Rice.

However, once Hamas officials were ousted from the Palestinian Authority (PA), Ottawa restarted diplomatic relations and financial support. "The Government of Canada welcomes the leadership of President Abbas and Prime Minister [Salam] Fayyad in establishing a government that Canada and the rest of the international community can work with," explained MacKay after the unity government's collapse in mid-2007 and the appointment of a new government in Ramallah. "In light of the new Palestinian government's commitment to nonviolence, recognition of Israel, and acceptance of previous agreements and obligations, and in recognition of the opportunity for a renewal of peace efforts, Canada will provide assistance to the new Palestinian government."

With Palestinian society divided and a more compliant authority in control of the West Bank, the Canadian International Development Agency contributed $8 million "in direct support to the new government." Part of this aid was directed towards creating a Palestinian police force "to ensure that the PA maintains control of the West Bank against Hamas," as Canadian ambassador to Israel Jon Allen was quoted by the Canadian Jewish News. US Lt. General Keith Dayton, in charge of organizing the Palestinian force, never admitted that he was strengthening Fatah against Hamas but to justify his program Dayton argued that Iran and Syria funded and armed Hamas. Bolstering Fatah to counteract the growing strength of Hamas was the impetus for Dayton's mission. However, the broader aim is to build a force to patrol Israel's occupation, a fact Dayton does little to dispel.

In January 2007, Foreign Affairs Minister Peter MacKay offered an immediate $1.2 million for Dayton's mission. A fifth of Dayton's initial staff was comprised of Canadians and during a press conference with MacKay in Jerusalem Condoleezza Rice said Dayton "has a Canadian counterpart with whom he works very closely." Two years later Dayton's military training force in the West Bank reportedly included nine Canadians, 16 Americans, three Brits and one Turk.

In June 2008, a Harper government press release announced that "Canada is a strong supporter of Palestinian security system reform, particularly through our contribution to the mission of Lt. General Keith Dayton, the US security coordinator, and to the European Union Police Coordinating Office for Palestinian Police Support."

Canada's contribution to the Dayton mission was part of a $300 million "aid" package that began in December 2007. According to the government agency Public Safety Canada, "a significant component [of the $300 million will be] devoted to security, including policing and public order capacity-building. This five year commitment will go towards the creation of a democratic, accountable, and viable Palestinian state that lives in peace and security alongside Israel."

But does anything close to a "viable Palestinian state" exist? Is Israel allowing it to be created? Growing Jewish-only settlements, Israeli bypass roads and the apartheid barrier all make a Palestinian state far from realistic in the short to medium term. Yet Canadian officials act as if Israel is working toward a Palestinian state.

In Gaza, Israel's occupation has turned into a blockade. For 27 months, Israel has reduced food and medicine from entering the tiny coastal territory to a fraction of what is needed by the besieged population. Yet, the Harper government has refused any criticism of the siege. Canada was the only country at the UN Human Rights Council (UNHRC) to vote against a January 2008 resolution that called for "urgent international action to put an immediate end to Israel's siege of Gaza." It was adopted by 30 votes with 15 abstentions.

Instead, the Conservative government has been quick to congratulate Israel for any small pause in its blockade. In January 2009 International Cooperation Minister Bev Oda proclaimed that "We commend Israel's decision to facilitate the delivery of humanitarian assistance [to Gaza] through a temporary ceasefire." A day after Oda's announcement, Israeli forces fired on a UN convoy during a ceasefire, killing a Palestinian aid worker. There was no follow-up statement from Oda condemning Israel's actions.

Compared to Ottawa's cheerleading most of the world was hostile to Israel's attacks on Gaza last winter. In solidarity with Gaza, Venezuela expelled Israel's ambassador at the start of the bombardment and then broke off all diplomatic relations two weeks later. Israel didn't need to worry since Ottawa was prepared to help out. "Israel's interests in Caracas will now be represented by the Canadian Embassy," explained The Jerusalem Post (Ottawa had been "doing this for Israel in Cuba" since 1973). In August 2009, the Canadian embassy in Caracas also began providing visas to Venezuelans traveling to Israel.

For defining Canadian policy as "we support Israel no matter what it does," B'Nai Brith International bestowed Harper with its Presidential Gold Medallion for Humanitarianism. The first ever Canadian to receive the award, Harper joined former Israeli Prime Minister David Ben Gurion, and US Presidents John F. Kennedy and Harry S. Truman. For its part, the Canadian Jewish Congress gave Harper its "prestigious Saul Hayes Human Rights award, named for a former CJC executive director, the first time it's been given to a sitting PM."

Despite the government's strident support for Israel, grassroots opposition to that country's policy has never been greater. Recent protests against the Toronto International Film Festival's spotlight on Tel Aviv were a major setback to Israeli public relations efforts. The festival embarrassment followed massive demonstrations against Israel's assault on Gaza, when many cities across the country witnessed their largest ever Palestinian solidarity demonstrations.

Alongside displays of opposition to specific Israeli policy, the boycott, divestment and sanctions (BDS) campaign is growing. Many social groups such as Independent Jewish Voices and Quebec's most active student Federation, ASSE, have joined the BDS movement, as have a number of unions, including the Canadian Union of Public Employees (Ontario), the Canadian Union of Postal Workers and the teachers Federation in Quebec. Social movements in Canada have never been more critical of Israel.

Yves Engler is the author of the recently released The Black Book of Canadian Foreign Policy and other books. The book is available at http://blackbook.foreignpolicy.ca/.