A poverty of leadership 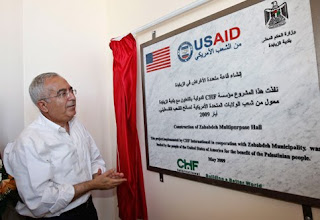 Salam Fayyad, the appointed Palestinian Authority prime minister and a favorite of the US government and developmentistas, is being groomed to succeed President Mahmoud Abbas. (MaanImages/POOL/Mustafa Abu Dayeh)

A firestorm of criticism has erupted since Friday's "postponement" of the United Nations Human Rights Council's (UNHRC) vote on the Goldstone report, which accused Israel of committing war crimes during its winter invasion of the Gaza Strip. The postponement was at the behest of the Ramallah Palestinian Authority's (PA) ambassador to the United Nations in Geneva, Ibrahim Khraishi. Palestinians globally and across the political spectrum have rightfully been outraged at what is not only an unbelievable act of cowardice and ineptitude, but a betrayal of the highest order. Indeed, anywhere else in the world it would be considered tantamount to treason. Sadly and unsurprisingly, it is what passes for leadership from Mahmoud Abbas.

While the shock and anger over Abbas's actions is understandable, it ignores how he has behaved to date. Indeed, burying the Goldstone report represents the culmination of Abbas's collusion and incompetence dating to the time of his (brief) assumption of the then newly created post of prime minister in 2003. As the newly appointed prime minister, Abbas drew scorn for appearing beside then US President George W. Bush and Israeli Prime Minister Ariel Sharon and reciting a speech that appeared to have been written by a low-level State Department staffer -- with nary a mention of Palestinian suffering.

Yet, this abysmal beginning was a highlight compared to his subsequent presidency. After being ignored by Bush and Sharon his first year in office, Abbas collaborated with the US and Israel in an attempt to undermine and overthrow the Hamas-run government elected in 2006.

After Hamas's takeover of Gaza a year later, Abbas all but endorsed Israel's siege of the territory, going so far as to order the PA's ambassador at the UN to block an attempt by Qatar and Indonesia to obtain a Security Council resolution "expressing concern" over "a pending humanitarian crisis." As the siege tightened, Abbas repeatedly insulted his own people, deriding their efforts to break the siege as well as attempts by international solidarity activists to draw attention to their plight.

Judging by their fumbling and inconsistent responses over the past several days, Abbas and his cronies were clearly caught off guard by the reaction to the postponement. After making the ludicrous announcement that he would empower an investigation into what happened at the UNHRC, Abbas dispatched the PA's "foreign minister," Riyad al-Maliki, to New York to participate in an emergency session of the UN Security Council called at the request of Libya to discuss the Goldstone report. Regardless of what happens at the Security Council, any rational observer must ask, exactly what kind of "president" is Mahmoud Abbas and who does he represent?

Therein lies the rub. Abbas's term as president expired on 9 January and he has been ruling under extra-constitutional emergency powers since. Not only is the emperor without clothes, he lacks legitimacy as well. However, he does have a freshly trained and equipped praetorian guard courtesy of Washington and US Lt. General William Dayton. The sole purpose of this force is to secure the rule of Abbas and his appointed Prime Minister Salam Fayyad and by extension the Fatah party. On display during this summer's Fatah conference, the new security force demonstrates that while the neoconservative freedom agenda of the Bush Administration is gone, it has been replaced by a repression agenda under the guise of stability and realpolitik. Palestinians will be hard pressed to know the difference.

Whether or not the clumsy attempt to shelve the report is the tipping point for Abbas's rule, the succession process has been underway for several years. However, it is being coordinated by the US and Israel and is no reflection of the wishes and desires of the Palestinian people. Abbas's likely successor is Fayyad, who somehow manages to be an even more uninspiring and unpopular character. Yet, one would never know this considering the fawning press coverage he has received in the American media over the past few months, including The New York Times, Time magazine and The Los Angeles Times. Fayyad is a favorite not just of American and European leaders, but the developmentistas who benefit from and ensure the perpetual state of dependence that defines the Palestine Industry.

In spite of the accolades from different quarters and hyperbolic claims of plans for effective institution-building, Fayyad's record is remarkably thin on actual achievements. With no electoral success to point to, he is left with just one verifiable "success": introducing direct deposit to the PA, in particular the security services. No doubt this was a difficult effort, especially due to opposition from late Palestinian President Yasser Arafat. However, what is never discussed in the glowing press accounts is that Fayyad's singular achievement barely qualifies him to be finance minister -- his position when direct deposit was implemented -- not prime minister and definitely not president. But this isn't about achievements or qualifications -- that is not how the PA functions.

Fayyad was a favorite of the Bush Administration, especially the former president, and so far has maintained that status with the Obama Administration. Both the Bush and Obama administrations have thoroughly manipulated Abbas and Fayyad, ensuring their mutual suspicion, competitiveness and insecurity in order to maintain a feckless and weak leadership beholden to the US and Israel and not to the Palestinian people. Meanwhile, the same supporters of the Abbas and Fayyad government who never tired of hailing every banal utterance by Bush and former Secretary of State Condoleezza Rice, regardless of how destructive their policies were to Palestinian rights and aspirations, have now sought to champion the meager efforts of the Obama Administration. Once again Palestinians are told that yet another American president is paying "attention" to their situation and is "focused" on the "peace process."

We have heard this all before, and unless Palestinians reclaim their national movement, we will hear it again and again. Palestinians and those sympathetic to their cause must recognize that Abbas and his clique will abandon any advantage and undermine any initiative that threatens the position, privileges and wealth they have accrued while in power. The PA will not dissolve itself, but it will disrupt and impede any progress or effort that threatens to truly challenge the occupation and Israel's system of apartheid of which they are an essential component and direct beneficiaries. No matter what success activists across the globe have against Israeli apartheid and the occupation, the PA will scuttle those gains. Tales of corruption, graft and incompetence at the highest levels of the PA are neither new nor shocking. What is, however, is that Palestinians have allowed this situation to persist. As a result, Abbas's government has grown more strident and obvious in its collaboration with the occupation, a fact fully realized in Geneva on Friday.

The calls for Abbas's resignation are long overdue and without question he is not now nor was he ever fit to be president of the Palestinian people. Similarly, Salam Fayyad has demonstrated that he is little more than a willing tool waiting to hear his master's call so he can ascend to power. These men are certainly responsible for the fiasco in Geneva, but Palestinians must also ask: who else is accountable? Accountability in this context is not just those who made and implemented this unconscionable decision, but the elected and appointed leadership of the Palestinian people who stood by and in their silence allowed it to pass. To date, the condemnations have been strong but the resignations have been few, and some likely self-serving. One wonders, where are the rest? Indeed, the measure for Palestinians in evaluating their leaders must now be: what did you do when Abbas shelved the Goldstone report? Did you oppose it? Or did you remain silent? Did you act? Or were you complicit? For those who claim to be leaders and representatives, this is how you will be judged -- now and by history. Let there be no doubt, there will be a reckoning and you must choose.

Absent from this discussion is what happened in those three weeks in Gaza. Nearly 1,500 Palestinians were killed, including 109 women and 320 children and thousands more were injured. Basic infrastructure, homes, businesses and schools were destroyed and because of the siege, are yet to be rebuilt. The use of white phosphorous and flechette bombs, indiscriminate shelling and bombing of civilian areas, use of human shields, and the list goes on. By burying the Goldstone report, the US, Israel and the PA also hoped to bury these crimes. With Gaza isolated and besieged, they believe that claims of Israeli war crimes will get overtaken by other events and lost in the media din. Considering the poverty of leadership in Abbas's regime, it is up to people of good conscience to step into the breach and ensure that Gaza is never forgotten and that the PA, like the occupation it serves, ends up on the ash heap of history.

Osamah Khalil is a doctoral candidate in US & Middle East History at the University of California, Berkeley and a frequent contributor to The Electronic Intifada. He can be reached at ofkhalil A T gmail D O T com.