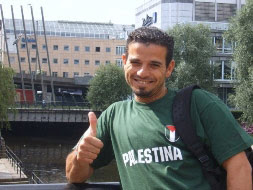 Addameer expresses its concern at the arrest and detention of human rights defender and activist Mohammad Othman on 22 September 2009. Mohammad, 33, originally from Jayyus village, is a human rights activist and a volunteer with the grassroots Stop the Wall Campaign.

At 8:00 am, on 22 September 2009, Mohammad arrived at the Allenby Bridge Crossing. He was returning home, to the West Bank, via Jordan, from his travels in Norway where he attended several speaking events and advocacy meetings. At the Israeli border control, Mohammad's passport was taken away, and he was asked to wait on the side. Mohammad waited until 10pm at the Allenby Bridge Border Crossing without any information for the reasons of his detention. At 10pm, he was arrested and transferred to Huwwara provisional detention center, located on the outskirts of Nablus. Two days later, on 24 September, he received a visit from an International Committee of the Red Cross delegate and was allowed to see a lawyer. Since the moment of his arrest, he has not been either questioned or interrogated once. Mohammad is due to appear before the military court on Tuesday, 29 September 2009.

Addameer believes that Mohammad Othman's arrest is related to his human rights activism. In the last few years, Mohammad has been extremely active in his lobbying and advocacy efforts by briefing activists and officials, locally and internationally, on Israel's illegal construction of the Apartheid Wall, informing the media on daily developments and monitoring human rights violations in wall-affected villages.

This is not the first time that the Israeli authorities have attempted to deter Mohammad from his human rights work. On 18 February 2009, during a night incursion and mass arrest of youth in Jayyus village, located in Qalqiliya governorate, the Israeli soldiers raided several houses, including that of Mohammad. They confiscated documents and information related to his advocacy against the Annexation Wall. In an interview given to Stop the Wall on 15 June 2009, Mohammad stated: "in my house, they took all the information about the Wall, information that had been collected from 2002-2009, CDs, boxes, pictures."

Addameer stresses that Mohammad's case is not isolated. In a report ("Repression allowed, Resistance denied") jointly published with Stop the Wall last July, Addameer argues that arrests of demonstrators and human rights defenders is a strategy designed to stifle activism and deter Palestinians from participating and organizing weekly protests against the Apartheid Wall, as a form of resistance to land confiscation. Collective punishment, including night raids and curfews, as well as individual threats of detention are also often applied. There is strong evidence that the Israeli Occupying Forces target the more active youth for arrest, such as the members of youth committees, but also members of popular committees, in order to break up protests and create disunity.

Most recently, in a similar event, on 20 July 2009, Mohammad Srour, a member of the Popular Committee Against the Wall in Nilin, another village affected by the construction of the Annexation Wall, was detained by Israeli border officials while crossing the Allenby Bridge from Jordan and taken to Ofer prison for interrogation. He was released on bail three days later. Although Srour was not charged, the courts said they were likely going to charge him, but they did not say on what grounds he was to be charged, or when. No court date has been set for his reappearance. In its final report submitted to the Human Rights Council, the UN Fact Finding Mission on the Gaza Conflict expressed its concern that his detention "may have been a consequence of his appearance before the Mission." Indeed, on 6 July 2009, together with an Israeli activist, Srour testified before the Mission in Geneva and described the fatal shooting of two Nilin residents, by Israeli forces during a demonstration against the conflict in Gaza in Nilin on 28 December 2008. This arrest, like the arrest of Mohammad Othman, is an indication of the increasing oppression of Palestinian communities engaging in ongoing protest against the Wall. Addameer is alarmed at the growing number of arrests of human rights defenders and protestors against the Apartheid Wall and stresses that such arrests are in violation to the International Covenant on Civil and Political Rights (ICCPR), and infringe on everyone's "right to freedom of opinion and expression" and the "right to freedom of assembly."

Addameer strongly condemns Mohammad Othman's arbitrary arrest and detention, and calls for his release. At the same time, Addameer reiterates its call to establish real mechanisms to protect the popular resistance against the Annexation Wall and their right to freedom of assembly.