Obama must match rhetoric with principle 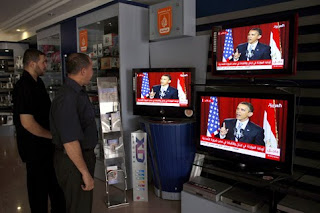 So far, the Middle East has seen words not actions from Obama. (Hatem Omar/MaanImages)

US President Barack Obama has placed restoration of the stature of the United States among his primary foreign policy goals. He has already achieved substantial progress in Europe, where polls indicate that he is widely admired. The president's June Cairo University speech also won praise in the Arab and Muslim worlds. Yet many across the globe still await the substantive policy changes implied by his inspiring words.

President Obama can solidify broader global respect by supporting the recommendations of the just-released Goldstone report in the United Nations Human Rights Council. Richard Goldstone, an eminent South African jurist, led a mission to investigate allegations of war crimes in Gaza last winter.
Indeed, the Goldstone mission concluded that Israel and Hamas committed war crimes and possibly crimes against humanity. The report recommends that both parties be given six months to mount independent, internal investigations -- and if they fail, that the UN Security Council refer the matter to the International Criminal Court for investigation and possible prosecutions.

Much of the 575-page report documents Israeli violations of the laws of war and human rights surrounding the intense fighting of last winter. That is fair, as the scale of harm Israel caused to lives and property in Gaza vastly exceeded that inflicted by Hamas. Israel killed approximately 100 Palestinians for every Israeli who died, and destroyed vast swaths of private housing, industrial buildings, agricultural facilities and public infrastructure.

The Israeli government boycotted the Goldstone mission; Palestinian authorities, in contrast, cooperated with it. Doubtless, the group's conclusions would have been more definitive had Israel shared information with its authors. Israel now seeks to discredit the report, attacking everything from Justice Goldstone himself to the UN Human Rights Council, and claiming that the report's findings would hamstring other nations -- including ours -- facing "asymmetric warfare."

This is nonsense. Justice Goldstone is a man of impeccable credentials and great personal integrity, and his colleagues are similarly distinguished.
The report is judicious and even-handed, and cannot be casually dismissed.

Nor is there anything novel about "asymmetric warfare," at least not of the kind waged by Israel, requiring departures from standard international law.
Colonial powers that displace indigenous peoples, as Israel does regularly in Jerusalem and the rest of the West Bank, have always faced armed, and sometimes crude, popular resistance. Israel's war against the Palestinians shares more with the French in Algeria than it does with our fight against al-Qaeda. Israel might prefer that international law revert to pre-World War II levels, but that would undermine protections for us all.

The Obama Administration should echo the Goldstone report and urge Israel to mount serious investigations of its military's documented misdeeds. In fact, US ambassador to the UN Susan Rice already did so in her January inaugural address to the UN. We should also not quail at the Goldstone mission's recommendation that the Security Council refer the matter to the International Criminal Court, if Israel fails to credibly investigate, as it has to date. Enforcement of international law cannot only be for the losers of international conflicts; indeed, the legitimacy of international law depends on its universal application. The world will take notice when President Obama's warming rhetoric is matched by equally principled deeds -- and will likewise take notice when it is not.

George Bisharat is a professor at Hastings College of the Law and writes frequently on law and politics in the Middle East. This op-ed was originally published by The San Fransisco Chronicle and is republished with the author's permission.