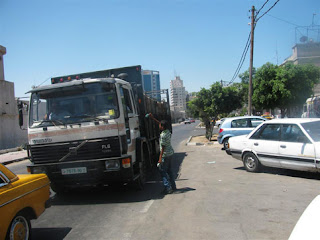 Zaher and Jihad are two boys living in Gaza. Every day they get up early and rush to Gaza City's streets so that they might find something to sell to those walking or driving by. Their fathers have been unemployed since the the intifada -- the uprising against Israeli occupation -- began in 2000 and they, along with thousands of others, were no longer allowed to work inside Israel. Conditions worsened after Israel imposed a siege on the territory in June 2007. The boys work in order to help their families.

Zaher, 17, from Gaza City's al-Tuffah neighborhood explains that, "I get up at 6am every day, then I go to a local farmer, where I pick up mint leaves. I carry the leaves and start my working day as you see me now." He buys small bunches of mint leaves for one shekel ($0.25). Working sunset to sunrise, Zaher earns about 90 shekels a day.

Zaher added, "I am forced to sell these leaves here. Otherwise my family cannot live. There are 10 members in my family, including me, my brothers and parents. No one helps us as my father has been without work for the past nine years. The only assistance we get is some food rations provided by UNRWA [the UN Agency for Palestine refugees] from time to time as well as some help from a generous relative."

While running among the cars in the street, Zaher explains that not everyone is supportive or generous. Stating that, "Sometimes some people, especially young ones in luxurious cars, mock us. I recall that one day while I was trying to sell mint to some young men in a car, they took the leaves from me and then drove away fast as the light turned green. When they stopped they gave me the leaves and said sarcastically 'who told you we want these leaves?'"

Standing on another corner at the al-Saraya crossing, Jihad al-Jael sells small packs of chewing gum. Jihad, 14, and his 15-year-old brother walk to the crossing every morning from the Gaza City neighborhood of al-Mujama al-Islami, which is about three kilometers away.

Jihad explains that, "I have five sisters and five brothers as my father has been without work for the past nine years. Under these harsh conditions me and my brother are forced to come here in the heart of Gaza City, in order to earn a living for hungry stomachs."

Jihad's father is not only unemployed but is also ailing. The family does not have another source of income other than the occasional food rations they receive from UNRWA.

Sadly, Jihad and Zaher are not alone. Children can be seen on Gaza City's other street corners, selling in front of stores or to passing cars. Other children sell tea, coffee or tissues at the Jundi al-Majhoul public garden in the al-Rimal district. All of them work to help their families.

Although the Palestinian Child Law of 2004 forbids children under age 15 from working, the phenomenon has become more prevalent among that age group and younger due to the harsh economic conditions in Gaza. In June, the International Committee of the Red Cross (ICRC) published a report stating that the closure of Gaza has pushed the unemployment rate to 44 percent and caused a dramatic rise in poverty. Currently, more than 70 percent of Gaza's population lives in poverty, with an income of less than $250 a month for a family of seven to nine.

A crippling Israeli blockade has hampered public life in Gaza, with 95 percent of local industries being forced to shut down, due to lack of essential raw materials and shortage of machineries. According to the ICRC, only 2,662 truckloads of goods entered Gaza from Israel in May. This represented a decrease of almost 80 percent from the 11,392 truckloads Israel allowed in during April 2007, before Hamas took over the territory amidst factional fighting with the US-supported Fatah party of West Bank Palestinian Authority leader Mahmoud Abbas. Israel imposed a siege on Gaza after Hamas' takeover.

Sajy al-Mughanni, communication officer for the UN children's agency (UNICEF) in Gaza, blamed Israel's 25-month siege for the growing poverty as well as the increasing number of working children in the region. He explained that, "We do have a high level of unemployment in Gaza. In terms of child labor, we don't have specific numbers. But we do use our teams to go out in the field, to do an assessment and try to intervene with the families. I can confirm to you that the phenomenon of child labor is growing. The increase of this phenomenon can be mainly attributed to the Israeli blockade."

Al-Mughanni added that, "We are coordinating with all UN agencies to provide food aid or health care to many families, in an attempt to provide relief and prevent further spread of the child labor phenomenon. However, this is not solving the problem drastically. So if we want to realize an end to such a phenomenon, the Israeli blockade should come to an end and Palestinians in Gaza should go back to their normal life, prior to the imposition of the siege."

Rami Almeghari is a journalist and university lecturer based in the Gaza Strip.