Jerusalem families waiting for US action 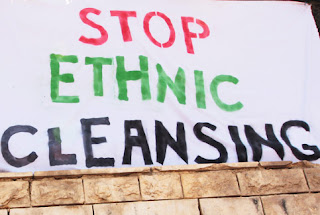 A banner hanging outside of homes in the Sheikh Jarrah neighborhood of East Jerusalem. (Tess Scheflan/Activestills)

In the early morning hours of Sunday, 2 August, a force of hundreds of police and border guards invaded the quiet East Jerusalem neighborhood of Sheikh Jarrah and systematically evicted the sleeping Hanoun and Gawi families from their homes. The sun dawned upon a new reality: chaos in the streets, children crying and elders in anguish. The police blocked every entrance to the area, preventing friends from coming to the aid of the distressed families or even helping them to remove their belongings from their homes. Revealing prior coordination with the authorities, the homes were quickly occupied by ultra-orthodox Jewish settlers.

The Hanoun and Gawi families, consisting of 16 and 38 members, respectively, lived in their homes for 53 years. Built in 1956 by the UN and the Jordanian government (who had sovereignty over East Jerusalem at the time) as part of a temporary housing complex for refugees of the 1948 war, these were homes for those who already knew eviction and ethnic cleansing. However, this time the dispossession was accomplished "legally."

Since the 1967 conquest of the West Bank and Gaza, Israel has been building settlements along the eastern flank of Jerusalem to prevent expansion of its Arab neighborhoods. Moreover, within the past 20 years, the Israeli settlement project has begun encroaching upon the Arab neighborhoods themselves, installing nationalist Jewish families within their perimeters by force. Slowly but relentlessly, Israel is attempting to Judaize these neighborhoods in a manner designed not to attract international scrutiny and criticism.

Thus Maher Hanoun, the head of the Hanoun family, was ordered by Israeli courts to hand over the keys to his home to the Association of Sephardic Jewry on 19 July. Rather than comply with the court order, he held a press conference outside his house accompanied by several top officials, including Nils Eliasson of the Swedish Consulate representing the European Union, Robert Serry representing the UN, and Dr. Rafik Husseini of the Palestinian Authority. They all condemned the proposed eviction, calling it an affront to norms of international justice. In spite of US President Barack Obama's call to freeze Israeli settlements in the Occupied Palestinian Territories, no representative from the US was present.

Hanoun, a 51-year-old salesman for the Nestle Corporation whose sales territory includes Jerusalem, the occupied West Bank, and Tel Aviv, is fluent in Arabic, Hebrew and English. He is a man of culture and conscience, a believer in peaceful co-existence. He is soft-spoken, dignified and humorous, a devoted husband and the father of three wonderful children. He is the global everyman -- simple, honest, hard-working -- hardly deserving to be evicted from his home. But he and his family were evicted, simply because they are Palestinian.

Where does this all leave us? Maher Hanoun, his two brothers and their wives and children and the Gawis, 54 persons all together, are now sleeping under trees 50 feet from their former homes. Menacing armored vehicles are parked in front of each house and the neighborhood is overrun with police, border guards and stone-throwing settlers.

The dispossession of the Hanoun and Gawi families is a clear act of defiance directed at the Obama administration's call to freeze settlements. If it succeeds, this will be a green light for Israel to continue with its ongoing ethnic cleansing of Palestinians in East Jerusalem. Already five additional Sheikh Jarrah families have received court summonses and they are fated to join the Hanouns and the Gawis in the street if this supposedly "legal" land grab isn't stopped. If the new US president is to have any credibility on the international stage, he must keep faith with Maher Hanoun. Outside his home, Hanoun hung a big banner bearing President Obama's picture and the slogan "OBAMA,YES YOU CAN stop housing evictions in Sheikh Jarrah." He and the world are still waiting.

Marcey Gayer is an Israeli-American activist residing in Tel Aviv.