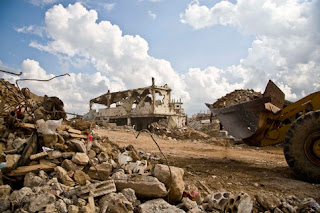 Despite the removal of 90 percent of the rubble from the destruction of Nahr al-Bared, two years on from the conflict, reconstruction in the official camp has yet to begin. (Hugh Macleod/IRIN)

NAHR AL-BARED (IRIN) - Two years on from the devastating battle which destroyed their homes and livelihoods, Palestinian refugees from Nahr al-Bared are set to see reconstruction work begin inside the camp's official boundaries.

Despite a resilient recovery under way among Palestinians living in the new camp -- the area around the edge of the official Nahr al-Bared refugee camp -- legal hurdles, political wrangling and the recent discovery of archaeological ruins under the site of the old camp have delayed reconstruction work there.

Nahr al-Bared old camp was completely destroyed and the new camp badly damaged in a 15-week battle in 2007 between the army and Islamist militant group Fatah Islam, which killed more than 400 people and displaced up to 30,000 Palestinians.

With over 90 percent of the rubble now removed, reconstruction in the first one-eighth sector of the old camp was due to begin six months ago, following the laying of the foundation stone on 9 March.

However, UNRWA, the UN agency for Palestine refugees, had to rethink construction plans to avoid digging deep foundations after the discovery of what Lebanon's Directorate General of Antiquities believes could be the remains of a Roman village under the destroyed camp.

After carrying out a survey, the Directorate has now agreed that reconstruction can take place, despite the misgivings of some Lebanese politicians.

The archaeological discovery followed lengthy negotiations in Lebanon's notoriously divided cabinet over granting the final green light for reconstruction, and after a complex but successful scheme to purchase land in and around Nahr al-Bared from its original Lebanese titleholders.

Reconstruction has been given momentum recently by two much-needed funding pledges to UNRWA, which had been struggling to raise money to meet even its basic recovery needs, let alone begin rebuilding the old camp.

In July, the US embassy in Lebanon announced an additional $25 million for the reconstruction of the old camp, now estimated by UNRWA to cost $328 million, and a further $5 million towards food, health care, shelter, access to basic education and improved water and sanitation services while the camp is being reconstructed.

In February, a second health care center on the edge of the camp opened, funded by the US, to serve families living in poorly equipped temporary shelters there, known as "the barracks."

The grant raised donations by the US to Nahr al-Bared to $71.8 million, making it the single largest donor.

In early May, Saudi Arabia became the first Arab country to donate to the reconstruction of Nahr al-Bared, contributing $25 million to rebuild the second section of the camp. Saudi Arabia, the United Arab Emirates and Kuwait have pledged to fund half the total reconstruction costs.

Overall, UNRWA has now received $92 million, plus $10.4 million from the Multi-Donor Trust Fund administered by the World Bank, which it says is enough for nearly one third of the official camp's reconstruction.

UNRWA's current early recovery appeal for $42.7 million to cover the last quarter of the year was just over half funded by the middle of July. The single largest relief cost is rent subsidies to 3,050 families, which cost around $500,000 a month.

There are now 3,100 families living in the new camp, with 2,000 families (10,000 people) still displaced and living mainly in neighboring Beddawi camp.

Wafika al-Hassan, a nurse at an UNRWA clinic, is one of those who have returned to their homes in the new camp. In the immediate aftermath of the conflict in 2007, IRIN visited the mother of three as she inspected the damage and looting of her home.

Today, with fresh paint on the walls, cement bags piled high on the streets outside and her children smiling around her, al-Hassan is optimistic about the future, despite working overtime to pay back the $15,000 she spent rebuilding her home.

"Social conditions are improving. People are trying to improve themselves and depression has decreased," she said. "The children used to talk about the war a lot, but now they are concentrating on school again and trying to forget what happened."

Eighteen-year-old Omar Baraka was a farmer from the old camp, until the battle destroyed his home and killed most of his cows. He now runs a bakery amid the cleared rubble and ruined buildings of the new camp and says business is fair, but that army restrictions on Lebanese entering the camp -- just 2,000 permits for Lebanese to enter have been issued -- mean little hope of a return to Nahr al-Bared's once flourishing marketplace.

"The checkpoints let through as much flour as we want, but there are no outsiders coming into the camp, so businesses can't expand," said Baraka. "Money is rotating between Palestinians only."

Charlie Higgins, UNRWA's project manager for the reconstruction of Nahr al-Bared, said there needed to be a new approach to the system of army-controlled checkpoints set up around both the new and old camps.

"Lebanese used to do their shopping in the adjacent area and in Nahr al-Bared camp, but they don't do it anymore as the market place that was highly integrated with the surrounding Lebanese local communities has not been restored."

This item comes to you via IRIN, a UN humanitarian news and information service, but may not necessarily reflect the views of the United Nations or its agencies. All IRIN material may be reposted or reprinted free-of-charge; refer to the copyright page for conditions of use. IRIN is a project of the UN Office for the Coordination of Humanitarian Affairs.