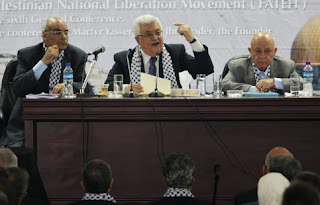 Palestinian Authority President Mahmoud Abbas (center) addresses delegates at the Fatah conference in Bethlehem. (Haytham Othman/MaanImages)
It has been an unnatural string of days here in Bethlehem. Gone is the usual quaintness. Palestinian police are working overtime and coffee shops are being lit up by men in suits with cigars in town for Fatah's sixth general assembly. The secular Fatah movement was founded in the 1950s and has since been at the forefront of the Palestinian national movement.

This is the first visit for many of the 2,000 Fatah officials who were exiled from Palestine decades ago. The last general conference of this kind happened more than 20 years ago in Tunis, but this year's assembly, which will re-elect the organization's 21-member central committee, comes at a bitter point in the Palestinian struggle. With Israel's recent (and yet another) act of violence -- the dispossession and eviction of two families from their Sheikh Jarrah home in East Jerusalem -- Palestinian Authority (PA) leader Mahmoud Abbas and his Fatah cohorts have to work against Israeli Prime Minister Benjamin Netanyahu's uncompromising chutzpah attitude.

But if there is one thing for which Fatah can be counted on, it is exemplary power and its capacity to intimidate -- in this case with the trappings of totalitarianism as defined by the single party and the suppression of all opposition.

Back in Bethlehem, the opening ceremony to the conference began. Covering the walls of the conference room were posters of martyrs and multiple banners attempting to make a spirit of resistance visible: some with slogans calling for the Palestinian right of return, others emphasizing armed struggle and independence. 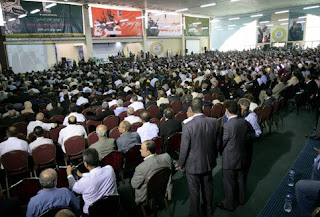 Thousands of Fatah delegates from around the world seated inside the conference hall. (Haytham Othman/MaanImages)

The Fatah anthem played and the solemn crowd stood with their arms catatonically hanging by their legs. In a matter of seconds, the delegates became absorbed in a spectacle of chanting and clapping when Abbas, whose presidential term expired in January, appeared on stage. As Abbas waited for his turn to read from what seemed like an inevitable 60-page speech, a man walked around the aisles handing out cheaply-made, Fatah-branded kuffiyehs (the traditional checkered scarf) to delegates and journalists. He insisted everybody wear it for the cameras.

The spectacle proceeded with an affectedly dramatic speech by former prime minister Ahmed Qureia, who partially owns al-Quds Cement, a company that has sold cement to Israel for the construction of Israel's illegal wall in the West Bank. Arousing anguish from the past, Qureia called for remembrance of the deceased Palestinian leader and founding member of Fatah Yasser Arafat and a moment of silence for the Fatah martyrs of Palestine.

Abbas took command of the stage, promoting Bethlehem as the besieged birthplace of Jesus. Delegates from Syria, Lebanon, Germany and other places, listened to Abbas talk about all the challenges facing Fatah, including an extended attack on Hamas' "shamefulness" for not allowing Fatah officials out of Gaza. As Abbas spoke about Gaza, a delegate stood up from his chair, yelling in a repeated and ominous tone, "Death to Hamas!" Nobody seemed bothered by the man's hatefulness. Abbas proceeded with his speech, giving a skewed history of the Palestine Liberation Organization (PLO) from its birth in 1964 to the present day, for the next two hours.

The old nationalist figures became restless one hour into his speech. In and out they went from the corridors to the outdoor canopy to catch up with their old comrades. In between the political gibberish, a sunglasses-clad Qaddafi clone arrived fashionably late while cell phones rang and clouds of cigarette smoke haloed the heads of delegates who sat and listened to a history they already knew and lived through.

It was hard not to hear the loud self-congratulatory tone of Abbas exuding from the speakers when he spoke of the importance of improving security measures inside Palestine. He spoke on the new laws the Palestinian police have been enforcing that are being used to "discipline Palestinians," as well as an investigation into Arafat's death -- without, of course, mentioning Fatah Secretary-General and PLO political department head Farouq Qaddumi's recent allegations that Abbas himself had collaborated with Israel to bring about the late president's death. He indirectly called out Qaddumi, saying those who wish to point fingers regarding Arafat's death should be ashamed of themselves. No mention, however, was made though of Abbas' draconian decision to temporarily shut the West Bank offices of Al Jazeera for airing interviews in which Qaddumi made his bombshell accusations.

Many of Fatah's young and old remained cynical about the possibility of overcoming the organization's infighting, saying they'd heard it all before. Apparently the one true believer was Jibril Rajoub, a former senior Fatah security official and former head of one of the many PA security forces, who is seen as a possible successor to Abbas. Rajoub told the horde of journalists who stuck microphones in his face that the the conference was "a rebirth" that would revitalize Fatah. 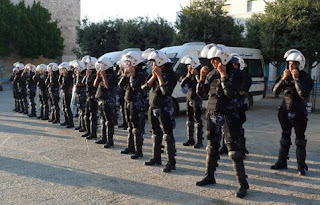 Palestinian police in riot gear outside the Fatah conference in Bethlehem. (Sousan Hammad)

But one just had to go outside to see the segregation among the delegates. The old and exiled, wearing khaki-colored uniforms reminiscent of their revolutionary days, gathered together to smoke cigarettes and drink Nescafe, while expressing gratitude to be back in Palestine for the one-week permit that was allowed them by Israel. Then there were the young: former fighters, such as Zakariya Zubeidi, who once led the al-Aqsa Martyrs' Brigades, but signed a so-called amnesty deal with Israel. He exuded optimism to the press on the urgency of pacification with Israel.

As one Fatah official, who wished to remain anonymous, said, "There are two planes in this movement: one plane of Dahlanists [Mohammed Dahlan and his cohorts] -- those who spout peace and pragmatism, and another plane of resistance -- those who want to keep armed struggle alive. But there is so much corruption that is occurring from those who hold high positions that I don't think we can come together...it's between them and us."

No matter that the West Bank and Gaza are becoming increasingly dependent on Western aid organizations to develop their own cities and villages, Abbas insisted on showing the exiled delegates the PA's "success." Despite Palestine's statelessness, Abbas mentioned how he has been improving security for the state. Upon hearing this, Mohamed Edwan (Head Press Officer to the PA who happened to sit beside me) shook his head and said, "This is a police state, not a state of security."

It is already difficult to see the purpose of such ceremonies, but when Abbas' very own communicator dismisses what he says as a falsehood, how can we expect Fatah's central committee, political agenda and electoral decision-making bodies to act in unison with party members, much less the political leaders of other factions, or even Israel? These are the bonfires Fatah faces at the conference.

Sousan Hammad is a journalist based in the West Bank city of Ramallah. She can be reached at sousan D O T hammad A T gmail D O T com.