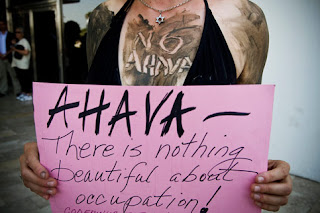 A woman with the Code Pink anti-war group protests against Ahava in Tel Aviv, June 2009. (ActiveStills)

Israel enjoys free trade of industrial goods with Europe under the Association Agreement it signed with the European Union in 2000. Yakov Ellis, chief executive officer of the Israeli cosmetics company Ahava, told the BBC radio program Today on 5 November 2008 that his company has benefitted from the free trade with the EU. Ahava owns stores in London and Berlin, and signed a contract in 2008 with the leading French perfumery chain Sephora, which has stores all over Europe, North America, Asia and the Middle East.

Ahava manufactures its cosmetics in the occupied West Bank, using minerals from the Dead Sea. The company's skin care products are imported into the EU as originating from "The Dead Sea, Israel." Israeli products originating in the West Bank are not supposed to benefit from the duty-free import to the EU.

Although one-third of the western shore of the Dead Sea lies in the occupied West Bank, Israel has closed off the entire shore of the Dead Sea and its resources to Palestinians in the West Bank. Kaliya was established as a military outpost shortly after the 1967 war in which Israeli forces occupied the West Bank (including East Jerusalem) and the Gaza Strip, along with Egypt's Sinai peninsula and Syria's Golan Heights.

According to the Israeli Coalition of Women for Peace, Ahava manufactures its products in the Ahava Dead Sea cosmetic factory in Mitzpe Shalem settlement. The company also runs a visitors center for tourists in the same settlement. In its authoritative ruling in 2004, the International Court of Justice reaffirmed the illegality of settlement construction, which includes the construction of industrial sites in the settlements. Ahava's factory and tourist visitors center exist therefore in violation of international law.

Ahava CEO Ellis told the BBC that his company can circumvent the rule that products from the Occupied Palestinian Territories are excluded from the duty-free import to Europe, because Ahava maintains its offices near Tel Aviv, in Israel. However, the EU rules of origin of product refer to the place where the product, or most of it, was manufactured, not to the place where a company's offices are based.

Despite this subterfuge, Ahava is bound to pay import taxes to EU countries. British customs officials expressed to the BBC their strong concerns that Israeli-produced goods made in settlements in the occupied West Bank may be circumventing import taxes en-route to British high streets.

It is not clear if and how EU member states police the free trade agreement. If the practice in the UK is common in EU countries, the situation is disturbing.

UK Member of Parliament from the governing Labor Party, Dr. Phyllis Starkey, raised questions on the issue to Business Minister Stephen Timms on 17 November 2008. Timms replied that more than 75,000 consignments from Israel entered the UK annually from February 2005 until January 2008. During this period, Israeli exporters were bound to indicate the place of production on the proof of origin documents.

Timms made clear that he was not aware of any investigations by the European Commission to determine whether Israeli importers are applying the rules with regard to goods being charged at the correct duty. Timms explained that in the three-year period, HM Revenue and Customs, the UK's customs and tax department, had raised 21 requests for information with the Israeli customs authorities to find out if the products originated from within Israel or from Israeli settlements in occupied territories. Thirteen requests were answered, and it turned out that six consignments originated from the Israeli settlements. Although the Israeli exporters had violated the rules, no fines were issued.

Ahava is actively promoting export of its cosmetics. Already sales in 25 countries account for about 50 percent the company's business. Customers around the world should be informed about Ahava's strong ties with illegal settlements in the occupied West Bank. Despite this, as well as the fact that the company uses Dead Sea minerals while Israel blocks Palestinians' access to their own Dead Sea shores, activists in France and the United States have recently launched campaigns against the sales of Ahava cosmetics.

Last week a "bikini brigade" of Code Pink, the American anti-war movement, protested in the nation's capitol near cosmetic stores with their bodies smeared with mud, underscoring the slogan that "Ahava is dirty business." Meanwhile in France, on 17 July a group of 30 women women paid a visit to Sephora comestics shop on the Champs Élysées in Paris to protest the sale of Ahava products, calling on the public to support the protest by sending messages to Sephora.

Adri Nieuwhof is a consultant and human rights advocate based in Switzerland.