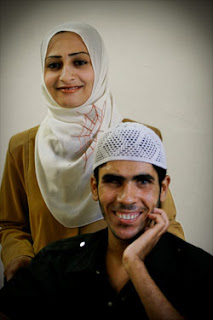 Newlyweds Rana and Mahmoud al-Zourby at their home in the Gaza Strip. (Eman Mohammed)


They say that all is fair in love and war. In Gaza, love and war have come together in a bittersweet union.

Rana, 26, like many women around the world, dreamed of walking down the aisle in a white dress and veil. But her marriage to Mahmoud is extraordinary in many ways as life is these days in Gaza.

On the rehearsal morning about a week before their planned wedding, Mahmoud, 21, got dressed with the help of his younger brother, then sat smiling in the corner as he waited for Rana to come visit to write out invitation cards. Before Israel's winter invasion of Gaza, it was easy for Mahmoud to recognize Rana from the merest glimpse. After the war he had to find new ways to sense her presence. "Sometimes I know she is around when I hear her giggle, or when I hear her talking to my mother," he said.

Mahmoud lost his eyesight and right leg during an air raid on the ninth day of the attack while he was having dinner with four friends at his neighbor's house. All survived but with severe injuries.

Rana is undaunted by the challenges Mahmoud faces adjusting to life with his injuries. "He lost his sight and his leg, but no bomb can ever take his heart, and he will never lose his sense of love," she said. "I can't understand why some people see what we are doing as hard; no marriage is easy," she added. "This is a life-long commitment, for better or worse."

At a traditional family gathering before the wedding, relatives and friends expressed their admiration for Rana and Mahmoud and have done much to support their wedding plans. Life for young couples is especially hard under the siege conditions in Gaza. A relative applied for Rana and Mahmoud to be included in one of the joint weddings held by the al-Tayssir Association, an Islamic charity that holds such events to help those injured in the war have normal lives. Mahmoud's parents have donated their bedroom to the young couple after renovating it for them.

Umm Rawhi, Mahmoud's mother, expressed her excitement about the expected wedding: "We may be simple people who don't have two pennies to rub together, but we are here for each other." Reflecting on her son's injuries, she added, "Marriage might be the last thing anyone in Mahmoud's shoes would think about, but life goes on."

Mahmoud's father, Abu Rawhi, added, "I was as surprised as others at Mahmoud's decision, but I would do anything to see him happy again, especially after all he has been through. Still, I would never want to jeopardize anyone else's happiness, even for my own son. So I thank God every day for sending Rana. She not only made my son happy, but she made all of us smile when we thought we would never smile again."

Eman Mohammed is a Jordanian-Palestinian freelance photojournalist and reporter based in the Gaza Strip since 2005.