A night in Bilin 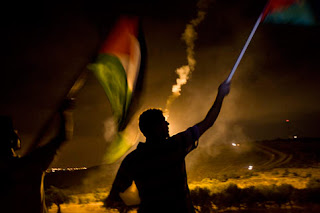 Over the last few weeks, the residents of Bilin have been subjected to constant night raids by the Israeli military, in retaliation to their weekly nonviolent demonstrations, now in their fifth year, against the Apartheid Wall, which has stolen over half of their land. So far, 17 youths have been arrested, some as young as 16 years of age, usually for their participation in the demonstrations. Many of the boys will not see their family again for months. With the situation getting critical, local activists of the Bilin Popular Committee called for a night demonstration to protest against the raids.

The village has become somewhat of a symbol of the Palestinian resistance, but they have often paid a heavy price for their spirit and resolve -- the Israeli army respond to their non-violent actions with brutal force; tear gas, rubber-coated bullets, and live ammunition, in April of this year resulting in the death of Bassem Abu Rahma, a local resident.

Mohammed Khatib, a member of the Committee, explained the motivation behind the decision to have a demonstration at night, stating that, “No-one goes to sleep before four or five in the morning.” He added that, “We stay awake all night, observing the movements of the Israeli military, fearing that we may be the next person to be kidnapped and thrown in jail. Now it is time for us to seize the initiative.”

As we gathered in the center of the village, with the clock approaching midnight, there was a perceptible atmosphere of tension. This was the first attempt at a night demonstration, and I for one do not trust a teenage Israeli soldier with his finger on the trigger shooting in the dark. Nevertheless, we were determined to make our message clear -- the night raids must end.

“We don’t want confrontation with the army… this is a peaceful demonstration!” announced Abdullah Abu Rahma, another member of the Popular Committee.

With a group of around 120 Palestinian, Israeli and international activists waving torches in the air, making our presence clear, we marched down toward the Wall, turning left before we reached it in order to avoid provoking the military. All the way chanting:

From there, the path got tougher, my wheelchair grinding over gravel as we continued forging our way through the dark. The whole time we had one eye over our shoulder -- considering the tear gas, sound bombs and other weapons we are usually greeted with, God knows how they would respond to this new development.

We reached an open area, and climbed up onto the grassy bank, looking down at the soldiers now frantically patrolling the Wall. We proudly waved our Palestinian flags, and lit bonfires to mimic the "camp-fires" the Israeli army set up every night, presumably to keep the people of Bilin on edge.

Sarah, an Egyptian activist attending the demonstration, told me about the affect of the raids on family life. She explained that, “It’s terrible… even the children can’t sleep. They are being deprived of one of their most fundamental human rights.”

As we stood around our make-shift fires, I was filled with feelings of both relief, that we had not been shot at, and of achievement, that we had managed to seize the initiative from the occupying forces. After many sleepless nights waiting and searching for invading soldiers, it was a great release of frustration to show that we would not stand for this injustice any longer.

The army clearly didn't have a clue how to respond, firing flares into the sky to get a better look at our activities. The result was magnificent views of incredible beauty -- you could see for miles!

The people of Bilin responded with trademark humor, a nearby family firing flares of their own, as an impromptu firework display emanated from the house, prompting cheers all round.

After more uphill marching, by which time my wheelchair was struggling but assisted by the pushing of Palestinian friends, we returned to the village unscathed.

Everyone agreed that the action was a success -- we had really turned the tables on the Israeli army, and we vowed to integrate the new tactic into our ongoing campaign of nonviolent resistance.

So it looks like there will be more sleepless nights for Bilin, but for a completely different reason.

Jody McIntyre is a journalist from the United Kingdom, currently living in the occupied West Bank village of Bilin. Jody has cerebral palsy, and travels in a wheelchair. He writes a blog for Ctrl.Alt.Shift, entitled “Life on Wheels,” which can be found at www.ctrlaltshift.co.uk. He can be reached at jody.mcintyre [at] gmail [dot] com.